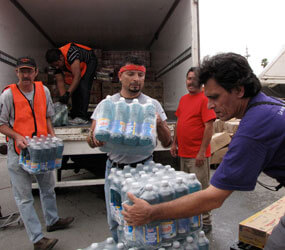 MONTERREY, Mexico – Caritas chapters across northern Mexico have mobilized in response to Hurricane Alex, the aftereffects of which continue to threaten many residents in the border states of Nuevo Leon and Coahuila with flooding, mudslides and water and sanitation problems.

“There’s no deadline for finishing our work,” Rodolfo Garza, a spokesman for the Archdiocese of Monterrey’s Caritas agency, told Catholic News Service July 6. “It’s still raining, there are still mudslides, there are still families that have lost everything.”

Hurricane Alex, which made landfall about 100 miles south of Brownsville, Texas, stormed through the region between June 30 and July 2, dumping more rain during that time than normally falls in a year in Monterrey, an industrial city of around 3.7 million residents. The storm affected rich and poor alike as rising waters swept away cardboard and laminate shacks built on flood plains and landslides wrecked luxury residences in the hills of San Pedro Garza Garcia, one of Latin America’s wealthiest municipalities.

“There hasn’t been a single group spared,” Garza said.

In Nuevo Leon, of which Monterrey is the capital, state officials reported at least a dozen deaths by July 7 and civil protection teams were still evacuating some areas at risk of being flooded. More than 130,000 water customers were still lacking service as of July 6.

In the neighboring state of Coahuila, officials reported 10,000 residents had lost their homes, while those living near the swollen tributaries of the Rio Grande were on alert.

Church officials have urged Mexicans to be generous, and Caritas chapters from as far away as Cancun have opened collection centers to help northern Mexico.

Bishop Raul Vera Lopez of Saltillo, which serves part of Coahuila, said in a July 5 statement that all parishes in his diocese would become collection centers for relief supplies.

Cardinal Francisco Robles Ortega of Monterrey called for local businesses to avoid price-gouging as reports emerged of five-gallon jugs of water being sold in the affected areas for as much as $20, more than 10 times the normal price.

Caritas officials in Monterrey have reported a strong outpouring of support, although delivering the merchandise locally has presented new challenges.

“We have an emergency committee, but we usually send people and things to other places,” Garza said.

The archdiocesan youth ministry and volunteers provided much of the manpower for sorting and loading donations, while parishes distributed relief supplies. Members of an all-terrain vehicle club brought Caritas relief to communities left incommunicado and inaccessible by the storm.

Some of the volunteers had lost most of their material possessions in the storm, which was the worst to hit the area since Hurricane Gilbert in 1988 claimed nearly 300 lives in northern Mexico.

During Hurricane Alex, Enrique Roman lost furniture, clothing and even the taco cart that provided his livelihood, but he still came to help sort and unload donations outside the Caritas offices.

“This is an obligation to come and help other human beings,” he said. “Thanks to God, we’re still alive.”