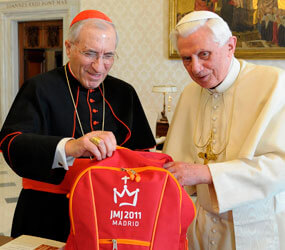 The cardinal, who will be 75 in late August, was the archbishop of Santiago de Compostela in 1989 when Pope John Paul II met young people there for World Youth Day.

It was only the second time that World Youth Day was held outside Rome; the first was in Buenos Aires, Argentina, in 1987.

“We had no experience. Now we’re part of a tradition,” he told reporters July 19 as he discussed plans for hosting World Youth Day Aug. 16-21 as archbishop of Madrid.

Twenty-two years ago, he said, only half of Spain’s dioceses sent young people to the event in Santiago, and now the whole country is mobilized to participate.

Back then, “it was something new. We didn’t know what an impact it would have on young people. Now we know.”

The cardinal has changed dioceses and he’s quite a bit older. In fact, he said, “in Santiago when I got into the popemobile with Pope John Paul, he said, ‘You’re a young bishop.’ I was 53.

“The young people also have changed,” the cardinal said, explaining that many of those who attended in 1989 were the children of parents who were part of the cultural revolution that swept Europe in the years surrounding 1968.

“For the bishops, it was a shock that there were so many young people involved or wanting to be involved in the life of the church,” he said. Many just assumed that young people in 1989 were not introduced to the faith by their parents and had no interest in Catholicism.

The general outline of World Youth Day – a papal welcome, the Way of the Cross, a nighttime vigil and a large closing Mass – has stayed the same, Cardinal Rouco said, “but the way the church participates and devotes time, resources and energy is much more intense because we have seen that it works.”

The cardinal said today committed Catholic youth are one of the most vibrant, visible groups of young people – especially in Europe and North America – and many cite World Youth Day as being the key experience that energized their faith.

The pastoral goal of World Youth Day 2011, he said, “is to reinforce the base of Catholic youths already involved in the church so that they can reach their peers, and to help all of them trust in themselves and in the future.”

Their No. 1 challenge, he said, is making their faith relevant in their daily lives, and he hopes they will find some answers and some strength through their experiences in Madrid.

The target audience for all the World Youth Day publicity inside Spain has been that 50 percent, he said.

A month before Pope Benedict XVI was scheduled to arrive for the celebration, de la Cierva said, “My greatest fear is to not reach the goal set by the pope: to help each participant have an encounter with Christ.

“To do that, we need to ensure there are times for prayer, rest, fun, togetherness and that they are safe. We also need to accompany them. But, still, it’s not in our hands and we’ll never know if it worked. In the end, it’s in the hands of providence,” he said.

Cardinal Rouco said he’s not worried about anything.

“There are so many people praying,” he said. “It’s in God’s hands and he is good.”