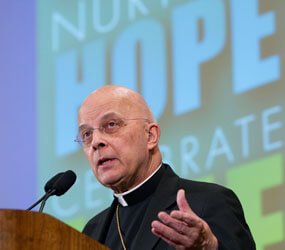 In his final address as president of the U.S. Conference of Catholic Bishops, Cardinal Francis E. George of Chicago criticized those who define the church’s usefulness by whether it provides “foot soldiers for a political commitment, whether of the left or the right.”

In his talk opening the Nov. 15-18 fall general assembly of the USCCB in Baltimore, the cardinal devoted much of his time to reviewing the debate over health care reform earlier this year and the “wound to the church’s unity” caused by differences over the final legislation.

Cardinal George said “developments since the passage of the legislation” have confirmed that “our analysis of what the law itself says was correct and our moral judgments are secure.”

He did not specify what those developments were.

The USCCB opposed passage of the final health reform legislation, saying that it would permit federal funding of abortion, inadequately protect the conscience rights of health care providers and leave out immigrants. Other Catholic groups, including the Catholic Health Association and many orders of women religious, said the final bill and an executive order signed by President Barack Obama would exclude any possibility of federal money going to pay for abortions under the health plan.

Cardinal George said the debate also raised the question of “who speaks for the Catholic Church.”

“The bishops … speak for the church in matters of faith and in moral issues and the laws surrounding them,” he said. “All the rest is opinion, often well-considered opinion and important opinion that deserves a careful and respectful hearing, but still opinion.”

He said the Catholic Church “should not fear political isolation; the church has often been isolated in politics and in diplomacy.”

“We need to be deeply concerned, however, about the wound to the church’s unity that has been inflicted in this debate and I hope, trusting in the good will of all concerned, that means can be found to restore the seamless garment of ecclesial communion,” he added.

He also dismissed arguments that the health reform legislation was too complex for the bishops to understand it.

The latter comment drew laughter from the bishops and a comment from the cardinal that this was “an arguable proposition, but we won’t argue it now.”

The cardinal, who was completing a three-year term as USCCB president, also warned against the U.S. Catholic Church seeing itself as “a purely American denomination.”

He expressed concern for Christians in the Middle East, saying that they were “uniquely … without protection in the wake of the American invasion of Iraq.”

Cardinal George’s voice caught as he told the story, recounted by a U.S. Dominican nun in Iraq who is a friend of a friend, of a 3-year-old boy named Adam who “witnessed the horror of dozens of deaths, including that of his own parents,” during the Oct. 31 massacre at the Syrian Catholic church in Baghdad.

“He wandered among the corpses and the blood, following the terrorists around and admonishing them, ‘Enough, enough, enough,’ ” the cardinal said, quoting the Dominican. “According to witnesses, this continued for two hours until Adam was himself murdered.”

“As bishops, as Americans, we cannot turn from this scene or allow the world to overlook it,” Cardinal George said.

He also urged attention to “the active persecution of Catholics in other parts of the Middle East, in India and Pakistan, in China and in Vietnam, in Sudan and African countries rent by civil conflict.”

Cardinal George also stressed the church’s “consistent concern for the gift of human life, a concern that judges the full continuum of technological manipulation of life the use of artificial contraception to the destruction of human embryos to the artificial conception of human beings in a Petri dish to genetic profiling to the killing of unwanted children through abortion.”

“If the poor are allowed to be born, then the voice of Christ continues to speak to the homeless and the jobless, the hungry and the naked, the uneducated, the migrant, the imprisoned, the sick and the dying,” he said.

“Our ministry is consistent because the concerns of Jesus Christ are consistent,” he added. “He is at the side of the poor.”