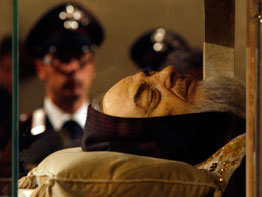 SAN GIOVANNI ROTONDO, Italy – Venerating the relics of St. Padre Pio is a reminder that the saints were real men and women who lived for God, said Cardinal Jose Saraiva Martins, prefect of the Congregation for Saints’ Causes.

In his homily, Cardinal Saraiva Martins said he wanted to emphasize two things: the meaning of death and the significance of venerating relics.

“That which we will see is a dead body, no longer animated by that breath which God the creator breathed into the primordial clay,” he said.

“Facing the mystery of death, we are called to understand that that which we see does not sum up everything about human existence,” the cardinal said. “The body is here, but Padre Pio is not just a body. In fact, he who lived in full union with the crucified Jesus now lives in absolute communion with the risen Jesus.”

Venerating the body of Padre Pio, he said, believers are called to remember.

“Looking at his mortal remains, we remember all the good he accomplished in our midst through this body. The relics of those who sleep in the Lord – and of the saints in a special way – invite us to look toward the future. They call us to renew our faith in the resurrection of the flesh.”

The Capuchins of San Giovanni Rotondo and the papal delegate for the saint’s shrine, Archbishop Domenico D’Ambrosio, have said the body will be on view at least until September, but perhaps for as long as a year before the crystal will be covered.

The shrine has opened a telephone line – (39-088) 241-7500 – which potential pilgrims can use to reserve a date and time for visiting the tomb. Those without reservations will have to stand in line and take a chance on making it inside the crypt between 7 a.m. and 7 p.m.

Padre Pio’s body was exhumed in a service that began late at night March 2 to verify the state of the body and to allow technicians to ensure its long-term preservation.

The friars had said the body was in “fair condition,” although the skull and parts of the upper body showed serious signs of decay.

The archbishop and the Capuchins hired Gems Studio, the London-based firm that makes figures for Madame Tussaud’s Wax Museum, to create a silicone mask – including a short moustache and ample beard – for the body.