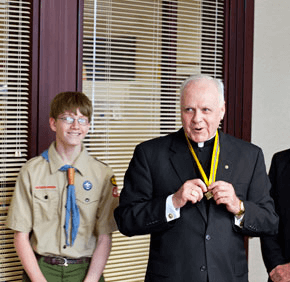 Cardinal Edwin F. O’Brien received the highest award a non-Scout can get for his support of the Scouts during his tenure in Baltimore.

Four Boy Scouts, who are members of the St. Mark, Catonsville, Boy Scout Troop 456, presented Cardinal O’Brien with the St. George Emblem April 12 at the Cathedral of Mary Our Queen, Homeland, parish center. He couldn’t attend the March 4 Scout Mass, which conflicted with his farewell Mass.

“I’m very grateful,” Cardinal O’Brien said. “There is no more important group within the community than the Scouts.”

The award was given through the National Catholic Committee on Scouting, which helps Scouts to “enhance their faith, serve God and become better Christians,” said Monsignor Thomas L. Phillips, the archdiocesan Scout chaplain and pastor of St. Gabriel, Woodlawn.

The St. George Emblem is awarded to laity and religious who have made significant contributions to Scouting, Monsignor Phillips said.

Cardinal O’Brien has “strongly promoted this opportunity for children to learn more about their faith,” Monsignor Phillips said. “It’s a really special award for people who promote the concept of Catholic Scouting.”

Cardinal O’Brien, a non-Scout, has done a lot to support youths, both in Baltimore and prior to his 2007 arrival, Monsignor Phillips said.

Cardinal O’Brien urged the Scouts to be involved in their parishes and serve as altar servers and lectors.

“I just want to encourage you to keep doing what you’re doing,” Cardinal O’Brien said. “I wish we had more groups like this.”

Andrew Rudrow, 13, an eighth-grader at St. Mark School in Catonsville and a member of Troop 456, said the Religious Emblem Program is “an opportunity to be closer to your faith.

“You get to learn it with your friends outside of church,” Rudrow said.

Zach Jones, a freshman at Mount St. Joseph High School in Catonsville and member of Troop 456, said “the award shows (Cardinal O’Brien) how much he has been involved in Scouting.”

“I think he was deeply touched,” Jones said. “The religious emblems are a great way to express your faith through Scouting. It gives you a way to deepen your faith. In today’s world there’s a lot of pressure against people who are of faith.”