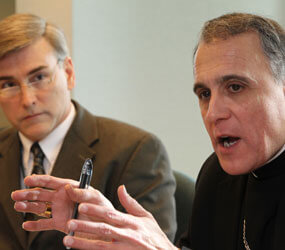 WASHINGTON – Three pieces of pro-life legislation supported by the U.S. bishops face “a very positive outlook” in the House, but their prospects remain in question in the Senate, Cardinal Daniel N. DiNardo of Galveston-Houston said Jan. 25.

The cardinal, chairman of the U.S. Conference of Catholic Bishops’ Committee on Pro-Life Activities, outlined the reasons for USCCB support of the legislation in three letters to members of Congress and at an informal news conference at the USCCB headquarters.

“I’m pleased at where we are in the House,” he said at the news conference. “I’m positive and hopeful.”

Cardinal DiNardo said in a Jan. 20 letter to members of Congress that with the debate over the Patient Protection and Affordable Care Act having moved to the Senate after a House vote to repeal, “the task of preventing the federal government from funding or promoting abortion can now be pursued in the House with less distraction from other issues and agendas.”

“Problems of abortion and conscience in the legislation can be addressed on their own merits, not greeted by false charges that any such effort is really an attack on health care reform,” he added.

“Efforts to ensure that our health care system truly serves the life, health and conscience of all will be a legislative goal of the Catholic bishops in the months to come,” the cardinal said.

The three bills backed by the USCCB – all introduced in the days preceding the Jan. 22 anniversary of Roe v. Wade, the U.S. Supreme Court decision that legalized abortion nationwide – are:

– Abortion Non-Discrimination Act, H.R. 361, which would “protect the civil rights of health professionals and other health care entities” by affirming that “no health care entity should be forced by government to perform or participate in abortions,” the cardinal said.

– No Taxpayer Funding for Abortion Act, H.R. 3, which would write into permanent law the long-standing prohibition on the use of federal funds to promote or support elective abortion.

“While Congress’ policy has been remarkably consistent for decades, implementation of that policy in practice has been piecemeal, confusing and sometimes sadly inadequate,” Cardinal DiNardo said in a Jan. 21 letter to members of Congress.

“On various occasions, a gap or loophole has been discovered that does not seem to be addressed by this patchwork of provisions – as when unelected officials in past years were construing the Indian Health Service or the Medicare trust fund to allow funding of elective abortions, and Congress had to act to correct this grave situation,” he added.

At the news conference, Cardinal DiNardo said it was a good sign that the No Taxpayer Funding for Abortion Act had been assigned such a low number by the House leadership, “because that’s usually an indication that the leadership is really interested” in seeing a bill passed.

The U.S. bishops also have expressed support for the Respect for Rights of Conscience Act, which has not yet been introduced in the 112th Congress. It would amend the health care reform law to allow insurance issuers, providers and purchasers to exclude from “items that are against moral and religious convictions” from any federally mandated benefits.

The cardinal said he was not familiar with another proposed piece of pro-life legislation, the Life at Conception Act that Sen. Roger Wicker, R-Miss., has pledged to introduce in the Senate.

The legislation would “establish in law what most Americans believe and what science has long known – that human life begins at the moment of conception and therefore is entitled to legal protection from that point forward,” Wicker said in a Jan. 24 news release.

“The intent behind it is certainly good,” Cardinal DiNardo said, adding that he had not studied the proposed legislation.