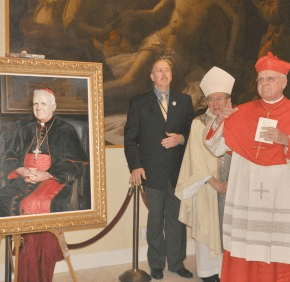 By Christopher Gunty
editor@CatholicReview.org
Cardinal Edwin F. O’Brien, archbishop emeritus of the Archdiocese of Baltimore, was honored with a bust, a new portrait and a building named for him in celebrations in early November in Baltimore and Washington, D.C.
At the Basilica of the National Shrine of the Assumption  of the Blessed Virgin Mary in Baltimore Nov. 8, Archbishop William Lori praised his predecessor as archbishop of Baltimore by comparing him to the founding archbishops of the archdiocese, who didn’t just build churches. Speaking of Archbishops John Carroll and Ambrose Maréchal, who played important roles in the early years of the archdiocese and the erection of the basilica, Archbishop Lori said they also built up the number of Catholics, raised awareness of vocations to the priesthood, educated the young and welcomed immigrants.
He said Cardinal O’Brien also built up the community by his ministry, noting that those gathered “express our prayerful gratitude for all that you have done to strengthen the foundation of the church by proclaiming the name of Jesus.”
After the Mass, Archbishop Lori noted that it is tradition for the basilica, America’s first cathedral, to feature marble busts of each of the Baltimore archbishops who have become cardinals. Also, the basilica rectory hosts a portrait of each of the 16 archbishops.
Greeting family, friends and others gathered for the unveiling of the portrait and bust, Cardinal O’Brien noted that when he came to Baltimore from the Archdiocese for U.S. Military Services, “I was blessed in so many ways.”
People all throughout Maryland know the work of the church, he said, especially in health care, education and “one of the strongest Catholic Charities in the country.”
Quoting the breviary, Cardinal O’Brien said, “God asks so little of us and gives so much, in this life and the next, to those who love him sincerely. … I say thanks be to God, and to all of you.”
The marble bust was sculpted by Nathaniel Risteen of Providence, R.I., who spent 14 months from start to finish on the project. He never met the cardinal before the night of the unveiling, working primarily from photographs. “Luckily there are now YouTube videos of him that I would watch and try to capture aspects of his personality,” Risteen told the Catholic Review.
The bust is displayed near the main entrance of the basilica.
William Nathaus of Fairfield, Conn., painted the large portrait of Cardinal O’Brien seated in his offices in Rome. He started in March of this year, and met with him in Rome, where the cardinal sat for a life-size oil sketch so the artist could get the right colors and flesh tones. Nathaus, also took photographs and other drawings.
The painting will hang in the archbishop’s residence.
Earlier in the week, the Archdiocese for the Military Services USA named its headquarters in Washington the Edwin Cardinal O’Brien Pastoral Center. During his tenure as the AMS archbishop from 1997-2007, Cardinal O’Brien made the decision to purchase the former seminary building and renovate it as a permanent home for the offices of the archdiocese which serves US military members throughout the world.
During the Nov. 5 ceremony, Archbishop Timothy M. Broglio praised the cardinal’s decision to acquire the center. “The wisdom of providing a permanent home for the offices of the AMS, for the archbishop, and for the priests who staff certain offices, has become ever more evident with the passage of years since March 2007 when you moved into the center. … Thank you for giving us a home.”
To see a video of Cardinal O’Brien at the basilica, click here.
Also see:
St Vincent de Paul expanding West Baltimore shelter Sarah’s Hope
Beyond the Bell: Mount de Sales Club supports the troops
PrevNext