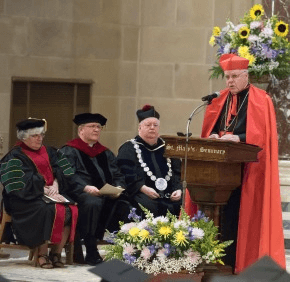 By Catholic Review Staff
St. Mary’s Seminary and University in Baltimore awarded degrees from its School of Theology and its Ecumenical Institute May 12 in the seminary’s chapel.
Cardinal Edwin F. O’Brien, grand master of the Equestrian Order of the Holy Sepulcher and archbishop emeritus of Baltimore, received an honorary doctorate and delivered the commencement address.
The School of Theology awarded 18 baccalaureates in sacred theology, two licentiates in sacred theology, one bachelor of arts in theology, three masters of arts in theology and 17 masters of divinity degrees.
The Ecumenical Institute conferred 10 masters of arts in theology, eight masters of arts in church ministries and one certificate of advanced studies in theology. The institute, the seminary’s evening and weekend division, offers fully accredited graduate theological education.
The presentation of the honorary doctorate to Cardinal O’Brien noted his two decades of service in seminaries, including two terms as rector of his alma mater, St. Joseph Seminary, Dunwoodie, N.Y., and four years as rector of the Pontifical North American College in Rome.
In his address, the cardinal noted that from the start of his time in Baltimore, “I was impressed by the Sulpician spirit of this institution – a highly motivated student body, a distinguished and committed faculty and staff, and quite especially, a most effective and generous board of trustees.”
He said he has never had the privilege or working with a board as deeply interested in every aspect of seminary formation. “It has made for a strong, up-to-date and efficient St. Mary’s Seminary and University.”
Reflecting on his current role as grand master of the Order of the Holy Sepulcher, which builds up the faith of its members and supports the work of the Latin Patriarchate in the Holy Land, Cardinal O’Brien noted that the schools in the Holy Land supported by the order have 19,000 students, 58 percent of whom are Christian, and the rest Muslim.
“I have always come away from the Holy Land deeply impressed by the harmony among Christians and Muslims there as well as by the collaboration among all Christian faith communities in fostering interfaith understanding and in providing for the needs of an oppressed Arab majority there,” he said. “Progress, great progress is possible when we share one common belief in the dignity of every human being made in the image and likeness of God.”
The cardinal said that belief was the motivation behind the visit of Baltimore Archbishop William E. Lori and several members of Baltimore’s interfaith community to Rome in March to receive Pope Francis’ prayer and blessing for peace in the city.
He added that the university’s Ecumenical Institute contributes to interdenominational understanding and civic harmony, noting that often while he was archbishop here he would “meet a pastor of a small Christian community (who) would boast of his or her love for St. Mary’s, with a diploma or certificate from our Ecumenical Institute supporting their spread of the Gospel of our Lord, Jesus Christ.”
In remarks at the close of the commencement, Archbishop Lori, who is chancellor of the university and who presided over the service, acknowledged this would be the last such ceremony for Sulpician Father Thomas R. Hurst as president rector of St. Mary’s. He called Father Hurst an accomplished scholar, a generous priest and a wise leader. Father Hurst plans to take a sabbatical before returning as a professor at the university.

Cardinal O’Brien also celebrated the baccalaureate Mass for Christendom College in Front Royal, Va., May 13, and received an honorary doctorate from the college at its commencement ceremony the next day.

Path to diaconate blazed by father