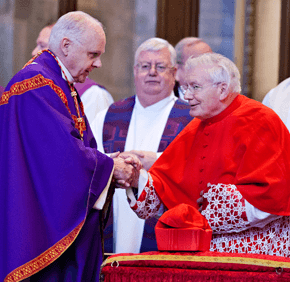 By Elizabeth Skalski
esklaski@CatholicReview.org
It was like a bridal procession.
The congregation turned to face the back of the church, necks craning to get a glimpse of Cardinal Edwin F. O’Brien as he walked down the center aisle of the Cathedral of Mary Our Queen.
Cardinal O’Brien celebrated a Mass of Thanksgiving March 4 at the Homeland church, attracting more than 600 people for what served as a celebration of his installation into the College of Cardinals and a farewell to the Archdiocese of Baltimore.
In his homily Cardinal O’Brien thanked parishioners for their support since his October 2007 instillation but also took the opportunity to talk about same-sex marriage and a federal mandate requiring birth control to be offered in health care plans (see page 3).
Cardinal O’Brien acknowledged that he thought Baltimore would be his final episcopal assignment and a “permanent marriage.”
“I am proud of what we accomplished together in seeking a secure future for our Catholic school system,” he said, “and beginning a process to do the same for our parishes.”
Last August, Pope Benedict XVI appointed the cardinal, Baltimore’s 15th archbishop, as the Grand Master of the Equestrian Order of the Holy Sepulcher of Jerusalem. Cardinal O’Brien was welcomed into the College of Cardinals at the Feb. 18 consistory in Rome, where he will be stationed full time once his successor is installed.
“Nearly four and a half years ago, I greeted you in this very cathedral and beamed that I was privileged to come to Maryland, where Catholics learned to defend the religious liberty of all,” Cardinal O’Brien said. “Much is at stake at this moment of our history, and our solidarity and perseverance will be essential in the months and years to come.”
In a rare public appearance, Cardinal William H. Keeler, Cardinal O’Brien’s predecessor and fellow archbishop emeritus, presided at the Mass, on his 81st birthday. The new cardinal told Cardinal Keeler that we “pray for you and your strength” and “your continued example.”
Archbishop Carlo Maria Vigano, apostolic nuncio to the United States, was one of the concelebrants of the Mass, and spoke briefly at the end about the esteem in which the Archdiocese of Baltimore and its current apostolic administrator are held.
Pat Harris, a parishioner of Church of the Crucifixion, Glen Burnie, said she was moved to tears during the Mass.
“I think (Cardinal O’Brien’s appointment to his new assignment) is wonderful,” Harris said. “He got to see Pope Benedict XVI. This is awesome, God is awesome.”
Debbie Tighe, a parishioner of the cathedral, said it was an honor for her to be at a Mass celebrated by Cardinal O’Brien.
“I think that Baltimore has always been a seat of Catholicism for so many,” Tighe said. “It’s an honor to be here today. I think a lot of people were really looking forward to it.”
At the end of Mass, Cardinal O’Brien told the congregation that as a native New Yorker he wasn’t thrilled, but followed protocol, and wore red socks that he will “never wear again” – a reference to the Yankees’ longtime rivals. He said he would donate the two pairs of red socks he wore for the consistory events to the Department of Education and to Catholic Charities for later charitable auctions.
He was met with roaring laughter.
Monsignor J. Bruce Jarboe, rector of the Cathedral, said his lasting memory of Cardinal O’Brien is “his decisive leadership.”
“He seeks advice, he seeks counsel, but he’s a quick study,” Monsignor Jarboe said. “He prepares well and is willing to make decisions. That strength of character, that strength of leadership I think is something I will always remember.”
Tah Canisius, a second-year seminarian at St. Mary’s Seminary and University, said he appreciates that the cardinal is “always ready to listen to us” and is also impressed by “his leadership.”
“The way he has been able to deal with the closings of the Catholic schools and reshaping of parishes” has really impressed him, Canisius said.
Jan Wetherell, a parishioner of the cathedral, said attending Mass with the Cardinal was “a once-in-a-lifetime experience.”
“It was a great grace to be able to celebrate in this special Mass,” Wetherell said. “He impressed me as a good bishop, a faithful bishop who stood up for the truth.”
PrevNext