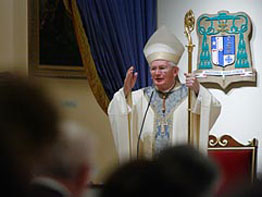 WASHINGTON – While presenting Cardinal William H. Keeler with a special honor April 14 in Washington, leaders of the Anti-Defamation League said the retired archbishop of Baltimore recently alleviated tensions between Jews and the Vatican.

In February Pope Benedict XVI rewrote portions of the old Roman Missal’s Good Friday prayer. In 2007, after the pope relaxed restrictions on the Tridentine Mass, Jews objected to the restoration of the prayer, which called for the conversion of Jews.

Though Mr. Foxman wouldn’t say what role the cardinal played in the pope’s decision to rewrite the prayer to remove language Jews found objectionable, he did say the retired prelate did “intervene to help resolve the issue. Through quiet and productive dialogue, he helped avoid a misunderstanding, and helped strengthen the bonds of our friendship.”

The ADL – a 95-year-old organization that fights anti-Semitism worldwide – hopes the pope will take extra steps in securing a full resolution over the Good Friday prayer during his U.S. visit April 15-20, Mr. Foxman said.

Cardinal Keeler was presented with the ADL’s Cardinal Bea Interfaith Award for his 44 years of influence in building positive relations between Catholics and Jews around the world, beginning with his participation in the Second Vatican Council and the adoption of “Nostra Aetate,” the Vatican II declaration on relations with non-Christians.

The document condemned anti-Semitism, repudiated the deicide charge against all Jews for all time and called for a new and respectful dialogue between the two religions.

The award is named in memory of Cardinal Augustin Bea, the German Jesuit theologian who drafted “Nostra Aetate.”

Cardinal Keeler also is credited with assembling Catholic and Jewish leaders in 1987 to smooth over Pope John Paul II’s reception of Austrian President Kurt Waldheim at the Vatican, which angered Jews because of the politician’s reported connection to the Third Reich.

Cardinal Keeler “also played a key role in achieving full and formal diplomatic relations between the Vatican and the state of Israel in 1994,” Mr. Foxman said. “He is also a great champion of Holocaust education in Catholic schools and a persistent foe of all forms of anti-Semitism.”

Though he retired as archbishop of Baltimore in 2007, Cardinal Keeler continues to serve as the U.S. Conference of Catholic Bishops’ moderator for Catholic-Jewish relations.

Ongoing programs such as “Bearing Witness” – which teaches students in more than 1,000 U.S. Catholic schools about the Holocaust, anti-Semitism and how Jews and Catholics can forge lasting respect for one another – have had a great impact on the Vatican, Cardinal Keeler said as he accepted the award.

“It reminds us all of what happened in the Holocaust,” he said, “and to make sure nothing like that happens again.”

Mr. Foxman said he was pleased that Pope Benedict made changes to the Good Friday prayer and added two meetings with Jews during his U.S. trip, one a brief encounter with Jews in Washington and the second a visit to a synagogue in New York.

However, he said he hopes the pope will issue a statement that the church is opposed to the conversion of Jews.

“The first steps (the German pope) has made is a good start, especially his planned visit to the synagogue, which says he recognizes Judaism as a faith,” he said. “We really would like for this to be joined by a statement.”