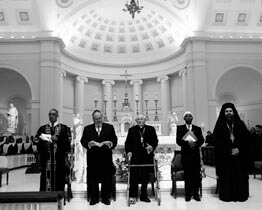 “He has served on numerous dialogues, 12 (three-year) terms on the bishops’ Committee on Ecumenical and Interreligious Affairs and on the Pontifical Council for Promoting Christian Unity. He has been a leader in promoting ecumenical relations as a significant aspect of his ministry as bishop,” Msgr. Mikulanis said.

“Our honoree leaves a deep personal imprint on and an unmatched legacy for Catholic involvement in ecumenism as well as in relations with Jews and in interreligious relations in the United States,” he added.

He noted that the first recipient of the Fitzgerald award had been one of Cardinal Keeler’s predecessors in Baltimore, Cardinal Lawrence E. Shehan, who was a leading pioneer in ecumenical and Catholic-Jewish relations in the 1960s and ’70s.

He said Cardinal Keeler’s in-depth involvement in ecumenical affairs goes back to the Second Vatican Council in the 1960s when, as a young priest, he assisted the staff of what was then the Vatican’s Secretariat (now Pontifical Council) for Promoting Christian Unity in translating the four documents it ushered through the council and explaining to media the progress of those documents and the meaning of their contents.

When then-Bishop Keeler was chairman of the bishops’ Committee on Ecumenical and Interreligious Affairs in 1983-86, he began attending the National Christian Unity Workshops and initiated the practice of briefing the Catholic ecumenical officers there every year on activities of his committee and on trends and developments in ecumenical and interreligious affairs nationally and internationally, Msgr. Mikulanis said.

Through those and other ecumenical and interreligious activities and his speaking and writing over the years, Cardinal Keeler “has kept this work at center stage of American Catholic life,” he said.

The association presented the award to Cardinal Keeler at its annual luncheon during the National Christian Unity Workshop, held in Arlington Jan. 29-Feb. 1. The workshop drew nearly 400 ecumenists from across the country.

The award, instituted in the late 1970s, is the highest given by the association. It is named after Msgr. James Fitzgerald, an ecumenical pioneer from the Diocese of Amarillo, Texas, who died in 1975.
Shortly after Vatican II, when he got the Catholic bishops of Texas to join the Texas Council of Churches — which was then renamed the Texas Conference of Churches — it was the first such state council in the country with full Catholic participation.