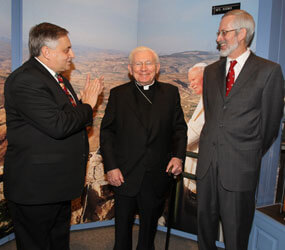 Rabbi Abie Ingber of Xavier University, Cincinnati, and Dr. William Madges, of Saint Joseph’s University, Philadelphia, presented Cardinal Keeler with a bronze medallion Dec. 14 at Baltimore’s Jewish Museum of Maryland, current site of the touring exhibition, “A Blessing to One Another: John Paul II and the Jewish People.”

“We are presenting the medallion in recognition of Cardinal Keeler’s support of the exhibition and his incredible work to bring blessing between America’s Catholic and Jewish communities,” Rabbi Ingber said.

The medallion is engraved with the papal crest of Pope John Paul II on one side and a relief image of the pope with the name of the exhibition on the other side.

The multimedia “Blessing” exhibition traces the origins of the pope’s efforts to end 2,000 years of conflict between Jews and Catholics. It was originally developed by Xavier University in partnership with the Hillel Center of Cincinnati, and the Shtetl Foundation and in consultation with an advisory board that included Cardinal Keeler.

More than 500,000 people have visited the exhibit across the country.

During the presentation, Rabbi Ingber noted that one of the titles for the pope is “pontifex maximus,” which means “master bridge builder.” Recognizing Cardinal Keeler’s contributions as a bridge builder, the rabbi joked that if there was such a title as “pontifex almost maximus,” the cardinal should have it.

After receiving the medallion, Cardinal Keeler said he wanted to speak directly from the heart.

“Peace,” he said simply, looking at a crowd of Jewish and Catholic supporters. “Shalom, shalom.”

During Pope John Paul II’s 1987 visit to the United States, Cardinal Keeler arranged for the pope to meet with Jewish leaders and Protestant representatives. He also organized an interfaith ceremony that brought the pope together with Jews, Muslims, Hindus and Buddhists.

The Catholic Review and the Baltimore Jewish Times are media sponsors of the exhibition, which runs through Jan. 1.

For a video report on the John Paul II exhibition, visit www.catholicreview.org/matysekblog.