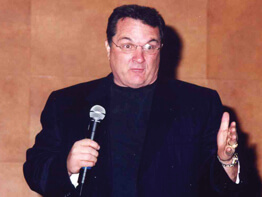 Every time Daniel Ruettiger walks in a room, he knows what a crowd is thinking.

The 60-year-old with a paunch and salt-and-pepper hair stood at the front of The Cardinal Gibbons School’s auditorium in Baltimore Sept. 13, looking like everyone’s dad.

Ever since actor Sean Astin portrayed Mr. Ruettiger in the 1993 movie “Rudy,” he has been dealing with second-take looks from the public. The film chronicled the emotional journey of a Catholic boy with dyslexia who eventually achieved his dream of playing for the University of Notre Dame football team in 1975.

“They’re used to seeing Sean Astin,” Mr. Ruettiger told a crowd of hundreds at Cardinal Gibbons. “You have a picture in your mind of ‘That’s what he looks like.’ Then I show up and it’s, ‘Oh.’ ”

Like many football-loving boys across the country, Cardinal Gibbons freshman Cory Mason has made the inspirational movie about a 5-foot-7, 165-pound underdog a regular part of his viewing habits.

After he watched Mr. Ruettiger deliver a motivational speech at the school, Cory admitted he was “matching the (movie) character’s facial expressions and they were the same.”

Cory and his cousin, junior Ben Brown, nonetheless bought into the aura and message of the real “Rudy.” They proudly showed off new autographs from Mr. Ruettiger, written on their arms.

“He definitely showed me that anything is possible,” said Ben Brown, whose father, David, is the Cardinal Gibbons principal.

“This will be benefiting the school for a very long time,” said Jeff Cheevers, Cardinal Gibbons athletic director. “Everyone knows his story. Every time the movie’s on, I watch it.”

Mr. Ruettiger played in the final contest of his senior season to chants of “Rudy! Rudy! Rudy!” He sacked the opposing Georgia Tech quarterback and was carried off the field by his teammates.

It is also the final image of the movie, which leaves people wiping away tears.

“Don’t be afraid to make mistakes,” he told the crowd at Cardinal Gibbons. “I made a lot of mistakes. I still make them. Have the courage to fail.”