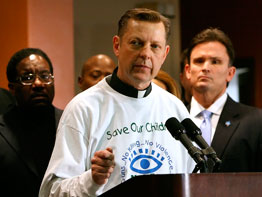 CHICAGO – Cardinal Francis E. George of Chicago expressed deep regret at Father Michael Pfleger’s “partisan” remarks about Democratic presidential candidate Sen. Hillary Clinton and said the priest had assured him he would “not enter into campaigning” or “publicly mention any candidate by name.”

“Words can be differently interpreted, but Father Pfleger’s remarks about Sen. Clinton are both partisan and amount to a personal attack,” the cardinal said in a May 30 statement.

Speaking May 25 at Trinity United Church of Christ in Chicago, the church to which Democratic presidential candidate Sen. Barack Obama belongs, Father Pfleger said Sen. Clinton saw Sen. Obama as “a black man stealing my show” when he entered the race for the Democratic nomination.

“She wasn’t the only one crying,” the priest added. “There was a whole lot of white people crying.”

Trinity United Church of Christ formerly was headed by the Rev. Jeremiah Wright, whose racially divisive views have been denounced by Sen. Obama.

Father Pfleger, who is white, is pastor of St. Sabina Catholic Church in a predominantly African-American section of Chicago.

Cardinal George said that “while a priest must speak to political issues that are also moral, he may not endorse candidates nor engage in partisan campaigning.”

“To avoid months of turmoil in the church, Father Pfleger has promised me that he will not enter into campaigning, will not publicly mention any candidate by name and will abide by the discipline common to all Catholic priests,” the statement added.

The Associated Press quoted Father Pfleger as saying he regretted his choice of words, which he said were “inconsistent with Sen. Obama’s life and message.”

“I am deeply sorry if they offended Sen. Clinton or anyone else who saw them,” he added.