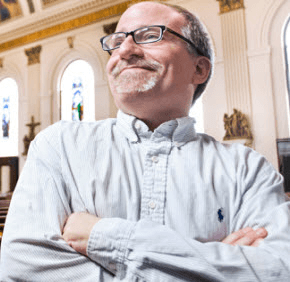 Timothy Ratajczak is an affable, serious man – a devout Catholic despite some doubts, thoughtful screenwriter of Christian films and an extraordinary minister of holy Communion at St. Casimir Parish in Canton, where he was baptized some 50 years ago.

“I flirted with the evangelicals for a few years but I missed the sacraments,” said Ratajczak, who has been in remission from leukemia since 2009 and received the sacrament of the sick at least once during the struggle.

Asked if the anointing worked, Ratajczak looked up from a Greek salad at G&A Coney Island Hot Dogs near his Belnord Avenue home and beamed: “Every time.”

The heroes of Ratajczak’s youth were Woody Allen and censor Mary Avara’s favorite hometown target, John Waters. As a young man, the lifelong Baltimorean was good enough friends with Edie “the Egg Lady” Massey, a member of Waters’ troupe, to take a bus trip with her to gamble in Atlantic City.

He doesn’t linger on the bad – at times, the 1979 graduate of Our Lady of Pompei High School is the definition of God’s cheerful giver – but admits that “living on a cancer ward is a pretty lonely place.”

Hollywood, meanwhile, is a funny place.

Consider that the director of Ratajczak’s beautiful 2012 Easter film, “Apostle Peter and the Last Supper,” is Gabriel Sabloff, who previously worked on “Night of the Living Dead: Origins 3D.”

“I was not consulted on the choice of the director,” said Ratajczak, who shares the film’s screenwriting credit with Sabloff. “The studio (Pure Flix of Los Angeles) is a producer-driven company. They picked the director.”

And the star of the film? Robert Loggia – the guy who played the capo “Feech La Manna” on “The Sopranos.”

As the Apostle Peter –the fallible fisherman upon whom Christ built his church, “a guy who really resonates with Catholics” said Ratajczak – Loggia is both subtle and sage. He surrenders to his fate with a quiet courage despite demonic visions in his death row cell.

“We never intimate to the public that the people who appear in our films share any belief system with the film,” said Ratajczak. “We hire professionals. Fred Willard (“Best in Show,” “Waiting for Guffman”) was in ‘Holy Man Undercover’ because he wanted to work.”

No matter the personal faith of those creating the films, the final product is both accurate and sincere enough to carry the Dove Foundation’s “family approved” label. The Dove group is more apt to line up with the religious who taught Ratajczak in parochial school than they would the late Pauline Kael.

“One of the nuns told us that if we went to see ‘A Clockwork Orange’ you’d go to hell,” laughed Ratajczak. “Later on, when I got (Clockwork star Malcolm) McDowell’s autograph I told him the story. He looked at me and said, ‘She was right.’”

Some of the films Ratajczak has written – which include “Hidden Secrets” and “Sarah’s Choice” – have prompted viewers to write.

“They were thanking me because the films helped them at a low point in their life,” he said.

He sees the spiritual side of his career (“Half of what I write is Christian, the other half is for myself”) as his ministry, one as valid as that of his 63-year-old brother, Conventual Franciscan Father Justin Ratajczak, a pastor in Boswell, Pa.

“Do I hope my films will convert people? Absolutely,” Ratajczak said. “Isn’t that what the Lord told us to do – spread the Gospel? Isn’t that the great commission?

A few years ago, Ratajczak – whose day job is director of marketing for a Baltimore-area construction company – wrote a screenplay called “Rhapsodies,” something of a love letter to his beloved Crabtown.

“It takes place in Canton and Fells Point and the Inner Harbor,” he said. “Baltimoreans deal with problems the same as everybody else, but more so. It’s an ensemble film filled with eccentrics.”

As it should be.

Ratajczak’s seventh movie – “Queen Esther,” a drama on the eponymous heroine of the Book of Esther and the figure upon which the Jewish feast of Purim is based – is scheduled to begin production in early summer.

“We show Esther defeating the anti-Semite Hamen,” said Ratajczak, who has also written horror and adds with a knowing smile. “It’s really a nasty little story.”