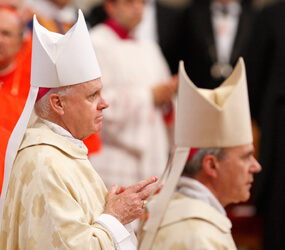 ROME – Walking into St. Peter’s Square Oct. 11 and seeing the huge portrait of St. Jeanne Jugan filled Mother Alice Marie Jones with a sense of thanks to God. Hanging from the façade of St. Peter’s Basilica, the tapestry portrayed the likeness of the foundress of Mother Alice Marie’s own Little Sisters of the Poor.

It stood side-by-side with the images of four others canonized by Pope Benedict XVI that day.

“It was gratitude for her littleness and thanksgiving,” said Mother Alice Marie, superior of the Little Sisters of the Poor at St. Martin’s Home for the Aged in Catonsville. “She would never have wanted to be recognized.”

St. Jeanne, who said, “Be little, little, little,” according to her official biography in the book for the rite of canonization, was known for a life of humility and simplicity in service to the elderly poor.

Mother Alice Marie was among a group from the Baltimore Province to attend the canonization and other events in Rome. The pilgrims included residents of St. Martin’s Home for the Aged and other Little Sisters’ homes, as well as family members, volunteers, young people, friends and benefactors.

Pope Benedict XVI was originally scheduled to celebrate the canonization Mass in St. Peter’s Square, but overnight rain moved the Mass inside St. Peter’s Basilica, with an overflow crowd viewing the Mass on large TV screens in the square. As it turned out, the weather was perfect.

Mother Alice Marie and the busload of pilgrims with whom she travelled first went inside the basilica, but found that it was full, so they went back outside, where they had an ideal vantage point of the screens and were close when the pope came out at the end of the Mass to pray the Angelus and bless the crowd.

Vatican officials estimated that 50,000 attended the Mass, inside and outside.

The five people formally inscribed into the canon of saints include an archbishop, two priests, a religious brother and a religious sister. Ministries of two of them, St. Jeanne and St. Damien de Veuster, had profound influence in the United States. The others are St. Zygmunt Felinski of Poland, an archbishop who was exiled to Siberia and is now considered an intercessor for all who are persecuted; St. Francisco Coll Guitart, a Spanish Dominican priest who initiated the “perpetual rosary” in parts of Spain; and St. Rafael Arnáiz Báron, a 20th-century Spanish Trappist brother known for his humility and life of prayer whom many described as a great mystic.

Archbishop Edwin F. O’Brien of Baltimore, at the invitation of the Little Sisters of the Poor, was one of about 30 cardinals, archbishops and bishops who concelebrated the Mass with Pope Benedict. Hundreds of other cardinals and bishops were in attendance as well.

Archbishop O’Brien said the large turnout was a “great sign of the church’s vitality, of the church’s health these days” as it honors the virtues of the saints who were canonized.

Reflecting on the differences in the lives of the new saints, from preaching to mysticism to sacrificial service, the archbishop said, “The variety of the charisms in those five are marked by great sacrifice in their personal lives. They helped others find the Gospel in very practical ways in the midst of their challenges, in the midst of their difficulties.”

In his homily, the pope said St. Damien “felt at home” as “a leper with the lepers” during the final years of his life.

“He invites us to open our eyes toward the ‘leprosies’ that disfigure the humanity of our brothers and sisters and that today still call, more than for our generosity, for the charity of our serving presence,” he said, according to a translation by Catholic News Service.

“John Paul II’s great mantra was the respect for every human being made in the image and likeness of God,” the archbishop said. “This has always been the message of the church.

Archbishop O’Brien said it’s a message that needs to be brought home in a “throwaway culture.” He noted that too often we dispose of those whose life seems less valuable.

Father Damien said he would rather die with the lepers on Molokai than return to Honolulu and receive treatment for the disease. His willingness to make a sacrifice to be with those to whom he ministered was a powerful witness to all, Archbishop O’Brien noted.

He added that these saints’ lives showed they were not perfect and they realized that.

Only three American bishops were included among the concelebrants at the Mass, he said. Archbishop O’Brien believes he was invited because of the Little Sisters of the Poor’s early association with Baltimore; they have been present in the area for 140 years.

Bishop Larry Silva of Honolulu leads the diocese that was home to St. Damien’s ministry on Molokai. Archbishop Elden F. Curtiss, retired bishop of Omaha, Neb., played an important role in confirming the second miracle attributed to St. Jeanne, which took place in his archdiocese while he was its shepherd.

The saints’ lives inspired people from all around the world to come to Rome. Groups came from their homelands and places affected and inspired by their ministry.

Naomi Ohana of Oahu, Hawaii, was one of more than 500 people with the official pilgrimage from the Diocese of Honolulu attending the canonization. At a vigil prayer service in Rome the night before the canonization, she told The Catholic Review she cannot imagine what Father Damien went through.

“His faith in God was so strong,” Ohana said, “that’s what had to have carried him through every day from morning to evening.”

She said the message people today should take from St. Damien’s life is that one person can make a difference.

Ellen McGloughlin of Arlington, Va., whose sister is a Little Sister of the Poor in New York and who was herself a member of the order until family health issues prompted her to leave the order, echoed the need of youths for inspiring examples. McGloughlin has worked as a chaplain at Georgetown University in Washington, where she found that young people “need to find a sense to their lives. … I find that’s what the kids are searching for.”

Mother Alice Marie, superior of the Little Sisters of the Poor at St. Martin’s Home for the Aged, said she hopes the message people take from the canonizations is to be open to God’s call. She noted that each of the new saints was in consecrated life in some way, either ordained or religious life. St. Jeanne’s mission was to grow in holiness in her love for God, she said.

“She was very open to whatever his will was for her when she saw the elderly poor.” That willingness to serve was lived out in her love and charity for the poor.

“I’m so grateful to be her daughter,” Mother Alice Marie said. “Now it’s time to live in the grace of the moment and grow in the love for her.”