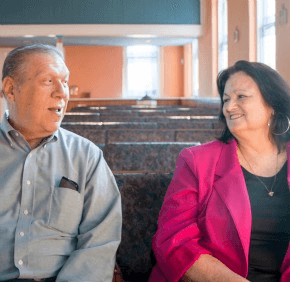 Almost five decades after Frank Pecukonis taught her to dance, Helen Palmer has taken the lead, shepherding him through grueling chemotherapy sessions as well as the given downs and fought-for ups of living with cancer.

“It’s always nice, I think, on a journey or trip, to have someone with you,” Pecukonis said. “God comes with me, and Helen.”

Palmer is happily married; Pecukonis is a lifelong bachelor. Both are active at St. Athanasius Parish in Curtis Bay, but their relationship began when he was a sixth-grader at St. Rose of Lima School in Brooklyn and his little sister brought a first-grade classmate home for dinner.

Pecukonis, 63, related the story from the Brooklyn Park home of his sister, Debbie Schmidt, to considerable laughter. Rawboned and 6-foot-3, he relaxed in a recliner, recovering from his latest bout of chemotherapy.

His other sister, Diane Barrett, was there, as was Palmer, the middle child in a brood of nine McGahagans. The two families became intertwined, as their parents volunteered together in school lunchrooms and at bingo nights.

After Pecukonis got his driver’s license, he drove the girls around in his Camaro, “to get a snowball, go to the mall or go to the movies,” according to Palmer.

“They needed to get around, and it was a safe way to do it,” said Pecukonis, who never fretted about being seen with his little sister and her pal.

Besides, Palmer said, “We were cool.” He helped them become, according to Palmer, the “hot tamales” of Catholic Youth Organization dances: “Frankie could dance. We’d run home, turn on the Supremes and pull the shades.”

“We’re just regular people,” Pecukonis elaborated. “God must like us; he made a lot of us.”

Pecukonis was caring for his dying mother when he fell seriously ill with esophageal cancer in 2013; she remained his primary concern.

“All I prayed for the whole time was that I would live for one minute past my mother so I could take care of her,” he remembered.

More wiped out than usual due to a recent adjustment in his chemotherapy, he marveled with gratitude about “God’s great timer” that had allowed him to care for not only his mother, who died two weeks after his diagnosis, but also his father, on their ways out of this world.

After Pecukonis began chemotherapy, he ran into Palmer at church, who asked, “Frankie, are you going to chemo by yourself?”

She joined the team escorting him to chemotherapy sessions. With Palmer’s help, he has found the upside to chemotherapy, which recently switched from biweekly to every third week, along with a regimen of pills. At the Baltimore Washington Medical Center in Glen Burnie, he is known as “mayor of chemo,” according to Palmer, who has her own unlikely notoriety there.

“When we walk in, everybody says, ‘Hey, Helen’s here,’” Pecukonis said. His response: “You know, I’m the patient.”

“He never has qualms if Frankie calls me,” Palmer said of her husband. “He’s just like, ‘Go.’”

“That comes from real love,” Pecukonis observed. It’s a gift Palmer, 58, has enjoyed throughout her life.

“Both of my parents were very loving,” she said. “They were always hugging us.”

“I think what they instilled in all of you was the sense that the best thing in the world is to take care of each other,” said Pecukonis, a retired psychologist whose work with adolescents – “Nobody liked working with them, but I did” – confirmed the importance of family and faith, the major guideposts of his life.

He and Palmer attend 8 a.m. weekday Masses at St. Athanasius in Curtis Bay, where they also serve as extraordinary ministers of holy Communion, but that faith long precedes his ordeal.

A graduate of the former Cardinal Gibbons School in Baltimore, Pecukonis served on the archdiocesan pastoral council under Cardinal William H. Keeler, archbishop emeritus of Baltimore, once traveling with him to Rome.

He chaired St. Athanasius’ first pastoral council, and led the committee that planned the parish’s centennial celebration for 1991. He and Palmer are helping plan the 125th anniversary celebration for 2016.

“I told them I won’t be around for the 150th,” Pecukonis quipped.

Whether dressing as salt and pepper shakers for Halloween or hosting, with special permission, an on-premises cookout for the other chemo patients, the pair has been embracing the message of Pope Francis’ Holy Year of Mercy since long before the jubilee’s Dec. 8 start date.

“Jesus stands in front of me,” Pecukonis said. “I put my hands around his shoulders and his neck, and I put my head on the small of his back. When he moves forward, I move forward.”

More than ever, a man for others