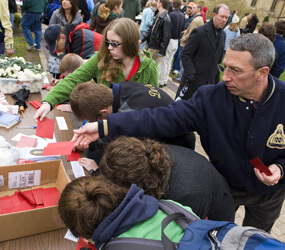 NOTRE DAME, Ind. – Organizers of an April 5 campus protest against the University of Notre Dame’s decision to have President Barack Obama as commencement speaker also launched a Red Envelope Campaign aimed at sending the president a message about abortion.

Critics of President Obama have said his support of legal abortion and embryonic stem-cell research make him an inappropriate choice to be commencement speaker at a Catholic university. The president also will receive an honorary degree.

The protest rally, organized by a campus pro-life coalition called Notre Dame Response, drew a crowd of about 400, made up of students, faculty, families and pro-life supporters from near and far.

Many in the crowd addressed empty red envelopes to be given to the Notre Dame president, Holy Cross Father John I. Jenkins, to give to President Obama.

“Father Jenkins, This envelope represents one child who died because of an abortion. It is empty because the life that was taken is now unable to be a part of our world. This envelope was going to be sent to President Obama on March 31. However, as he is scheduled to receive an honorary doctorate of laws degree from Notre Dame on May 17, we ask that you deliver it to him on our behalf at that time.”

In a March 23 statement, Father Jenkins said the invitation to President Obama “should not be taken as condoning or endorsing his positions on specific issues regarding the protection of human life, including abortion and embryonic stem-cell research.”

He also said the university community sees “his visit as a basis for further positive engagement.”

The keynote speaker at the rally, Harold Cassidy, a nationally recognized attorney who has litigated pro-life cases to protect the interests of pregnant mothers, recalled the effects of the 1984 speech given on campus by then-Gov. Mario Cuomo of New York, a Catholic who said he supported keeping abortion legal even though he was “personally opposed” to it.

In that approach, Gov. Cuomo assumed “the conclusion that the unborn child is a human being, whose life should be given the same legal protection of other human beings, is a purely religious belief,” explained Mr. Cassidy.

He said Gov. Cuomo suggested it was “a Catholic belief” that could not be forced on non-Catholics.

“Gov. Cuomo’s assumption that it is a religious belief gained great traction and caused great harm,” said Mr. Cassidy. “It has been used to undermine the credibility of Catholics who attempt to engage in serious discussion about the injustices of legal abortion.”

He said both President Obama and former Gov. Cuomo have many fine qualities.

“Our disagreement is over an issue that is far more important than any of these” qualities, continued Mr. Cassidy, referring to the right to life. “Its magnitude outweighs that of any other issue, and all other issues combined.

“It’s a disagreement about the injustice of the killing of tens of thousands of human beings, and the destruction of the rights, interests and health of their mothers,” he said.

As he continued his speech, Mr. Cassidy was briefly interrupted by Notre Dame sophomore Mistee Colbert. As others tried to quiet her by standing in front of her, Mr. Cassidy asked them to stop, saying he welcomed those who disagree with him.

“I agree with you,” shouted Ms. Colbert, “but Obama’s coming here has nothing to do with abortion.”

Mr. Cassidy told her, “I’m speaking. You can speak when it’s your turn.”

“No, no … I can speak right now!” said Ms. Colbert, who maintained that President Obama only wants to congratulate the Notre Dame graduates and not promote any of his agenda.

Mr. Cassidy wrapped up his talk and the students led the crowd in praying the glorious mysteries of the rosary as rain began to fall. People popped open umbrellas and continued to pray.

Later, Ms. Colbert told Today’s Catholic, newspaper of the Diocese of Fort Wayne-South Bend, that she is a pre-law student who is against abortion, but said she thinks the dissent on campus against President Obama’s visit is also racially motivated.

Chris Labadie, a senior majoring in theology, who is chairman of Notre Dame Response, said his organization planned to meet with Ms. Colbert and other concerned students to discuss the role racism may play in the criticism.