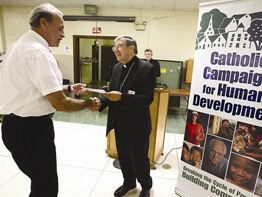 As Our Lady of Pompei, Highlandtown, parishioner Paula Cisneros talked Aug. 23 about learning the English language and working to create a safer neighborhood, she noted that she and other members of the Latino group Proyecto Esperanza are not alone.
“We have the help of the bishops and the CCHD,” she said to members of the Catholic Campaign for Human Development, as she accepted $25,000 in grant money from the organization. “We have faced many challenges, but we have been able to organize. In unity, there is strength.”
Started by the U.S. Conference of Catholic Bishops near 40 years ago, the Catholic Campaign for Human Development helps poverty-level income groups by offering them a way to help themselves to lives of dignity and self-respect.
In the St. Francis of Assisi Church Hall in Baltimore, seven national and five local CCHD grants totaling $222,500, were distributed Aug. 23. In the fall of 2006, members of the Archdiocese of Baltimore contributed $252,000 toward the CCHD annual collection – the largest amount ever.
“You yourselves are to be greatly commended for your hard work for justice,” Monsignor William F. Burke, pastor of St. Francis and head of the local CCHD told those gathered for the awards luncheon.
Bishop Denis J. Madden, urban vicar, who presented the awards, congratulated the groups and praised the work of the local CCHD and its volunteer members, many who have served faithfully for three decades. He also thanked parishes for their generous response to the annual CCHD collection.
Catholic parishes represented at the luncheon included St. Augustine, Elkridge, St. John the Evangelist, Columbia, Corpus Christi, Baltimore, and the Catholic Community of St. Michael and St. Patrick, Fells Point.
CCHD awards $162,500 in national grants to: United Workers Association, Baltimore, $35,000; Save Middle East (Baltimore) Action Committee, $30,000; P.A.T.H. (People Acting Together in Howard), $30,000; Proyecto Esperanza, Baltimore, $25,000; Maryland Disabilities Forum, Baltimore, $20,000; Nuestra Casa del Pueblo, New Market, $12,500; Faith Fund, Baltimore, $10,000.
Organizations receiving $60,000 in local CCHD grants include: Holy Ground Campaign, Baltimore (BRIDGE), $15,000; Baltimore County ACORN, $15,000; Youth as Resources, $10,000, Alternative Directions, Baltimore, $10,000, Maryland Disabilities Law Center, Baltimore, $10,000.