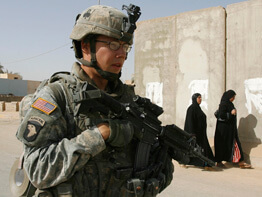 WASHINGTON – The legacy of President George W. Bush will be framed primarily by one event: the ongoing war in Iraq.

At five and a half years and running, the Iraq War – portrayed by President Bush as a vital front in what he has characterized as the war on terror – has left Americans divided and much of the world community looking beyond the United States for diplomatic leadership.

The war stands out for being the first whereby the U.S. took pre-emptive action to head off what it considered a potential threat to its national security.

However, surveys show Americans are growing increasingly impatient with the war as the cost of remaining in Iraq soars to nearly $560 billion and casualties mount. The Web site www.icasualties.org recorded 4,171 U.S. soldiers killed and another 30,634 injured as of Sept. 24. (The figures do not include Iraqi deaths or those of foreign military forces and private contractors.)

Even with the planned withdrawal of 8,000 troops within the next several weeks, more than 130,000 U.S. military personnel will remain in the country when either Republican Sen. John McCain or Democratic Sen. Barack Obama takes the oath of office as America’s 44th president Jan. 20.

How the two major candidates address the war is indicative of the personal histories of each man.

Sen. Obama, who publicly opposed the war even before his election to the U.S. Senate in 2004, has pledged to seek a “diplomatic surge” to bring peace to the region.

Sen. McCain, the military hero who was physically abused as a prisoner of war during the Vietnam War, adheres to a stay-the-course strategy, promising to eradicate Iraqi-based terrorism before he will consider reducing U.S. forces in the country.

Specifically, Sen. Obama has said he plans a phased withdrawal of U.S. troops, beginning almost immediately after taking office. His plan calls for virtually all troops to be withdrawn by the summer of 2010, leaving a residual force to perform limited missions in support of the Iraqi government. The senator from Illinois has said gradual troop withdrawals would pressure the Iraqi leadership to move more rapidly to take responsibility for the country’s security.

In contrast, Sen. McCain uses the language of his military background, promising to take whatever steps are necessary to fight terrorism and keep America safe. Sen. McCain’s plan calls for reducing the U.S. military presence in Iraq only when Iraqi forces can safeguard the country. Demonstrating his commitment to the war effort, the senator from Arizona said during a campaign stop in January that troops would stay in Iraq for 100 years if necessary.

Neither view matches exactly the stance of the U.S. Conference of Catholic Bishops, which initially opposed military intervention and since 2006 has called for bipartisan cooperation to bring about a “responsible transition” in the oil-rich nation. The bishops seek the return of U.S. troops as soon as possible, provided the Iraqis can govern their country in the wake of the war, explained Stephen M. Colecchi, director of the USCCB’s Office of International Justice and Peace.

“The bishops don’t see the war in Iraq primarily as a partisan issue,” Mr. Colecchi told Catholic News Service. “They see it primarily as a human and moral issue.

Along with stabilizing the country, the bishops say the needs of more than 2 million Iraqi refugees – many of them Christians who fled to Syria and Jordan – and another 2 million internally displaced Iraqis must be addressed.

Sen. Obama’s platform concurs with the bishops’ assessment. No mention of refugees and displaced people can be found in Sen. McCain’s platform.

Catholic analysts say the situation in the Middle East is much broader than Iraq and that whoever becomes president will find the perilous relationship between Israel and the Palestinians undermining any attempt to achieve peace in the region. Iran’s role in the insurgency in Iraq, Iran’s nuclear program and the dangers posed by Islamic extremists also pose challenges for the U.S. role in the region.