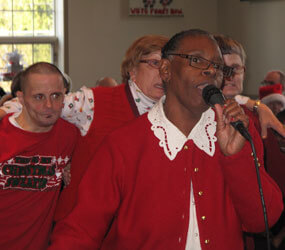 SPARKS – Bill Fleming didn’t need to finish his sentence. As he welcomed people to the Camp GLOW Christmas Party at the Monsignor O’Dwyer Retreat House Dec. 18, he told them a special guest was on his way.

Nearly in union, the more than 150 attendees yelled “Santa Claus!”

Fleming, the director of Camp GLOW and the Archdiocese of Baltimore’s disabilities ministry office, smiled enthusiastically and nodded his approval, prompting some campers to clap their hands and others to dance.

Such is the pure, innocent joy of Camp GLOW, which operates for three sessions every summer for people with special needs at the retreat house. The camp gives campers the opportunity to work on arts, crafts and music, as well as swim and participate in other physical activities.

The Christmas party began in 2009 as an idea to reunite the Camp GLOW companions, people who assist Fleming in working with the campers. But, the companions quickly told Fleming they wanted the campers there as well.

Now, the year isn’t complete without a Christmas Party.

“To me, it’s Advent personified,” Fleming said. “Some will go home and they have no Christmas.”

The party included a DJ, clowns, food and fun. Campers, such as Linda Wiley, could grab the microphone and sing his or her favorite Christmas tunes. Bonnie Block, a longtime Camp GLOW attendee, even sang a solo version of “O Holy Night” that she had been rehearsing for weeks.

Sophia Pileggi, a parishioner of St. John the Evangelist in Columbia and a student at the Catholic University of America in Washington, D.C., has been a companion for several years and has developed a relationship with campers such as Shawna Trageser, who offered hugs to all she saw.

“For me, you just see the pure joy that’s in all the campers,” Pileggi said. “You see the face of God every day. You come out thinking ‘Life is great and I have so much to be thankful for.’ ”

For Pileggi, seeing Santa Claus come to the party to pass out gifts to campers was a moment of pure joy.

Rebecca Himes, a parishioner of St. Isaac Jogues in Carney and a student of Mercyhurst College in Pennsylvania, loves being a companion and misses her Camp GLOW friends while she’s at school.

“You realize that even though they have certain issues, they are just like anyone else,” Hines said. “They are the most loving people you will ever meet. They just want to show you their special talents. It’s so exciting for them to see people care.”

Fleming said Camp GLOW has become such a hit in the special needs community that there are advanced talks of bringing a smaller version to Western Maryland families as well. Details, he said, are still being worked out.

Fleming said Christmas is transformed thanks to the Camp GLOW party at the O’Dwyer Retreat House.

“I see Jesus here,” Fleming said. “I never feel the Lord more present than when we are together. It fills your heart and tells you this is your mission in life to be with, not serve, them. I’m not doing anything for them that they aren’t doing for me.”