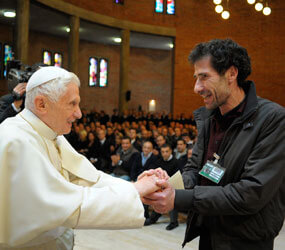 ROME – Pope Benedict XVI told inmates at a Rome prison that people say nasty things about him, too, but it’s important to remember that there are other people ready to offer their love and support.

During a visit Dec. 18 to Rome’s Rebibbia prison, the pope gave a short speech and then responded to questions from six of the inmates gathered in the prison’s Church of Our Father.

Federico, an inmate from the prison infirmary, which includes men who are HIV positive, told the pope that people say “ferocious things” about the inmates. “We have fallen and hurt people,” he told the pope. “We have lost our freedom, but we ask you to help ensure we don’t lose our dignity.”

The pope told the inmates, “In my family,” the papal household, there are four consecrated laywomen from the Memores Domini branch of Communion and Liberation. They have friends in the prisons, the pope said, so the sufferings, needs and concerns of inmates are a frequent topic of prayer and conversation in the papal apartments.

As for those who are not so understanding, the pope said, “we must put up with people who speak about us in a ferocious way. They speak ferociously about the pope, too, and yet we keep going forward.”

In his prepared talk to the inmates, dressed in street clothes with most wearing sweatshirts, some with hoods, Pope Benedict said, “I’ve come simply to tell you that God loves you with an infinite love.”

Citing the Gospel of Matthew, Pope Benedict said that “wherever there is a hungry person, a foreigner, a sick person or a prisoner, there is Christ himself who is awaiting our visit and our help.”

While human justice and divine justice obviously are different, he said, those who mete out justice on earth have an obligation to ensure that prison terms respect an inmate’s human dignity, promote restitution to the victims and society at large, and prepare the inmate to leave prison as a responsible member of society.

Pope Benedict said he knows overcrowded prisons make it even more difficult to maintain the dignity of the prisoners, and governments must do more to alleviate the situation so that it does not become a “double sentence” for the inmates.

An inmate named Rocco asked the pope if he thought Italy’s politicians would see the pope’s visit as a call to work harder to ensure dignified conditions for the 1,700 inmates.

The pope responded that while his visit was a private initiative, he hoped it would call attention to the rights and needs of prisoners.

A prisoner named Alberto, who said he is “a new man” and the father of a 2-month-old baby girl, asked the pope whether it was right that he was still in prison.

“Congratulations! I’m happy that you are a father, that you consider yourself a new man and have a splendid daughter; this is a gift from God,” the pope said. While the details of Alberto’s case made it impossible for the pope to judge whether or not he should still be in prison, he said he hoped he could return home soon, hold his daughter and build a strong family.

Gianni, another inmate, asked the pope why he had to go to confession for pardon instead of just getting on his knees and asking God for forgiveness.

“Naturally, if you get on your knees and, with real love for God, pray that God forgive you, he will,” the pope said.

But sin doesn’t disturb only the relationship between an individual and God, he said, it harms the community of the church and wider society. The sacrament of reconciliation “is the great gift by which, through confession, I can free myself from this and can receive real forgiveness, including in the sense of a full readmission into the community of the living church,” he said.

Nwaihim Ndubuisi, an inmate from Africa, told the pope that he had watched his November visit to Benin where the people are full of faith, but quite poor. “Does God only listen to the rich and powerful?” he asked the pope.

“No,” said the pope. In fact, seeing the faith and joy of the people of Benin made him think that “in rich countries joy often is absent. We are all so worried about so many problems,” he said. “With the mass of things we have, we seem to be further from ourselves and from the experience that God exists and is close to me.”