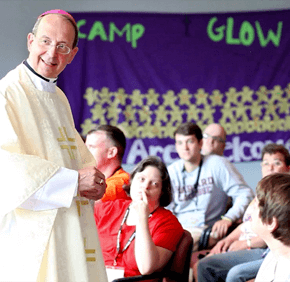 By Elizabeth Lowe
elowe@CatholicReview.org
Twitter: @ReviewLowe
SPARKS – Barbara Heim lights up when she talks about the 34 years she has volunteered at Camp Glow.
“They teach you,” said Heim, 93, referring to the adults with special needs attending a camp that began in 1979. “It’s just a happy place.”
Camp GLOW (God Loves Our World) is a series of three, six-day residential summer camps for Baltimore-area adults with special needs.
The first session is June 16-21 at the Monsignor O’Dwyer Retreat House in Sparks.
“For many, it’s the only vacation they’re going to get,” said Bill Fleming, director of the Archdiocese of Baltimore’s Office of Disabilities Ministry and director of Camp Glow, who noted there are about 35 participants and 15 volunteers at this session. “We celebrate their giftedness. It’s really an evangelizing moment.”
Fleming noted that campers call him at home – months before camp – wanting to know the details of the next session.
“Over the years it has hit home how important it is to them,” said Fleming, who began volunteering at the camp in 2001 and has been its director since 2006.
“It’s a big deal,” said Mary Marshall, 53, a volunteer for several years. “I believe these folks are closer to God than anybody. I get so much out of it. They provide a reality check for me.”
“I love it (camp),” said returning camper Ginger Penn, 59. “I go swimming, play bingo.”
This session of Camp Glow includes arts and crafts projects, a much anticipated talent show, nature walks and daily Mass, celebrated by a different priest, among other activities.
When Baltimore Archbishop William E. Lori arrived at the retreat house June 18 to celebrate Mass, he received a round of applause from campers. During the liturgy, campers gave the archbishop numerous hugs.
“Camp Glow is one of the most special times in the year for the archdiocese,” Archbishop Lori told the Catholic Review. “The people with special needs show us how special God’s love is for us. Every time I come to Camp Glow I experience God’s love in a very deep and beautiful way.”
The Catholic Review previously reported the archbishop is no stranger to people with special needs. His older brother, Frank, has autism.
“This is one of the greatest experiences you could ever have,” said Daniel Franchy, 20, a parishioner of St. Augustine in Elkridge and a returning camp volunteer. “They (campers) genuinely care about you and each other.”
The second session of Camp Glow is July 21-26 and the third session is Aug. 4-9, both in Sparks.
Fleming hopes there will be a Camp Glow West in Western Maryland next summer.
The camp is funded through the archbishop’s Annual Appeal, parishes, Knights of Columbus councils, businesses and individuals, according to information from the archdiocese. Each session costs about $20,000, Fleming said.
Read about, and see photos from, Archbishop Lori’s 2012 visit to Camp Glow here.
Copyright (c) June 20, 2013 CatholicReview.org
PrevNext