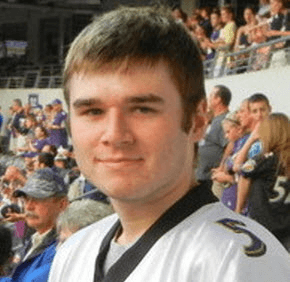 Jack Levee, who was to begin his senior year at Calvert Hall College High School in Towson this fall, died in July after a severe allergic reaction and asthma attack.

The 17-year-old was diagnosed as a baby with an allergy to peanuts, milk and eggs, said Rocky Levee, Jack’s father, who noted the family believes Jack ate a restaurant hamburger thought to be cooked in peanut oil – inducing the allergic reaction that led to his death a week later.

“I didn’t realize myself, a long time ago, how could somebody be allergic to peanuts?” said Rocky Levee, whose family belongs to St. Margaret, Bel Air. “Once you experience it firsthand, you learn.”

“From the time he was able to speak he was told not to eat anything that we didn’t give him. He would say, even as a tiny boy, ‘No, I can’t eat it,’ ” Joyce Levee said. “He always went to every party, every school day with a lunchbox. He always had his own snacks and no one was ever to feed him.”

According to the Centers for Disease Control and Prevention, 3.4 million children have reported food allergies in the past 12 months and an estimated 4 to 6 percent of children in the U.S. under age 18 have food allergies.

A correct diagnosis can be made when those with a food allergy eat whatever it is they are believed to be allergic to, Shubin said.

After the diagnosis, “one should avoid what one reacts to,” Shubin said. “It’s obvious, but first you have to know what you react to. That is the best way by far. Nothing else comes close.”

“Fifteen years ago I’m not sure we paid attention to this,” said Stembler, who noted the issue is now “front and center.”

“High school is probably a little different than elementary school,” Stembler said. “We’re going to put a lot more onus on the kid. Sometimes you’re in a situation where a kid can eat something he doesn’t know and all of a sudden you have to deal with it.”

Joyce Levee, who administered cardiopulmonary resuscitation, or CPR, to her son when he collapsed at home that early June morning, urges parents or caregivers to know CPR, first aid and to have Benadryl and an EpiPen on hand in case of an emergency to “potentially help or save your child,” she said.

“Be careful, take it seriously, be aware (of the allergy),” Joyce Levee said. “Don’t think because you’re getting older that it’s going away or it’s getting better.”