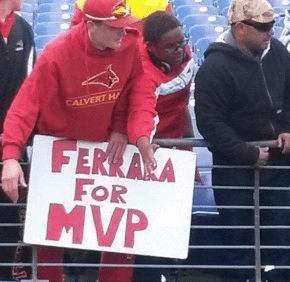 Calvert Hall faced a 15-0 deficit in the second quarter and its injury-riddled backfield was down to a sophomore wide receiver as its best option to carry the ball, but the Cardinals gritted out a 25-22 victory over Loyola Blakefield Thanksgiving Day in the 95th annual Turkey Bowl at M&T Bank Stadium.

Peter Ferrara, a junior, booted a 30-yard field goal with 2:11 left to break a tie and give Calvert Hall its first lead and the only one that mattered. He had missed two point-after attempts, but was buoyed by a clutch 36-yard field goal on the last play of the first half and the support of his teammates.

“During the (last) TV timeout, everyone, every single person, said they had my back,” Ferrrara said. “I knew everyone was there for me.”

It was Ferrara’s first Turkey Bowl. He kicked for the junior varsity last year, when he said his biggest moment was giving Calvert Hall some breathing room in a four-point win over Mount St. Joseph in the MIAA A Conference championship game.

Cardinals’ coach Donald Davis, conversely, had had a year to deal with an overtime loss in the 2013 Turkey Bowl.

“It’s been difficult,” Davis said. “You can’t do anything about that in the off-season, but we’ve got a great group of seniors who put us in a position to compete.”

Senior quarterback Kenji Bahar completed 15 of 17 passing attempts for 156 yards and two touchdowns, both by junior wide receiver Morgan Scroggins. The Cardinals’ defense shut down the Dons in the second half, and senior end Jeff Wheaton clinched the victory by recovering a Loyola Blakefield fumble in the final minute.

With Kevin Thomas hurt earlier in the season and Timothy Smith and T.J. Massey leaving the Turkey Bowl with injuries, B.J. Watson, a sophomore wide out, was pressed into backfield duty. He came up big, creating a tie at 22 with a 40-yard touchdown with 3:30 left in the third quarter.

Calvert Hall drove 65, 52 and 75 yards for three touchdowns in the third quarter, the only thing slowing its momentum a freakish fumble recovery and 65-yard run for a touchdown by Loyola Blakefield’s Ryan Gallagher. It came on a kickoff return, when initial returner Dana Young appeared to be down when the ball squirted out. Gallagher picked it up and set off for a lineman’s dream.

That score was sandwiched in between touchdown receptions by Scroggins, of 22 and 14 yards. After he loosened up the Dons’ defense, the Cardinals’ offensive line opened some huge holes for Watson.

The Dons controlled the line of scrimmage at the start and drove 62 yards on their second possession, as senior Marcellus Brown shed numerous would-be tacklers for an 11-yard touchdown run with 8:56 left in the first half.

Loyola Blakefield used trickery on the point-after, with an unbalanced line opening the way for a two-point conversion pass from kicker Jake Barwick to center John Staab.

The Dons got the ball back three plays later, when Lawrence Cager, Calvert Hall’s All-American wide receiver, lost a fumble near midfield.

On third-and-long from the Cardinals’ 23-yard line, Azende Smith took a swing pass from quarterback John Goska and rambled into the end zone with 3:54 left in the half.

Calvert Hall got on the board on the last play of the half, when a 32-yard pass from Bahar to Dionte Austin set up Ferrara.

Calvert Hall backers included NFL draft analyst Mel Kiper, from its class of 1978. Loyola Blakefield followers included Bill Taneyhill, class of 1937 and 95 years young, who was in attendance with his sons, Jim (’65) and Tom (’67).