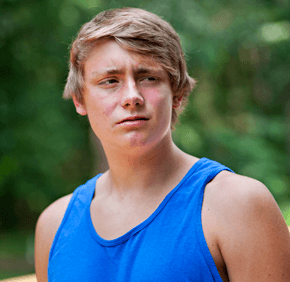 The catch is that they weren’t swimmers floundering in a pool.

Panopoulos and two friends were being driven home by one of their mothers around 4 a.m. July 20 after a midnight screening of “The Dark Knight Rises.” He happened to look out the window and see a roof on fire.

The parishioner of Immaculate Heart of Mary in Towson and a graduate of its parish school quickly called 911.

“I pointed it out ’cause the house was on fire and nothing was being done about it,” said Panopoulos, 16. “I was like ‘stop the car.’ We were knocking on the door and yelling.”

Panopoulos described the man and woman who came outside as in their 40s.

“They were like ‘thank you,’” Panopoulos said. “They were in shock so they didn’t say much. I did something that most people would do.”

The one alarm fire at a single family home in the 900 block of Cromwell Bridge Road damaged the roof, said Lt. Paul Massarelli, a spokesman for the Baltimore County Fire Department.

The Baltimore County Fire Department may honor Panopoulos with a citizens award next spring after the events surrounding the 911 call are reviewed, Lt. Massarelli said in an email. The award recognizes “citizens who go above and beyond.”

Donna Jean Rumbley, Panopoulos’ mother who attended a different midnight screening of the film for the radio station she works for, was awake at their Towson home waiting for her son to walk through the door.

It was Panopoulos’ lifeguard training that prompted him to think fast, Rumbley said, and being at the right place at the right time.

“I think his Catholic upbringing has definitely helped him through the years to be a good person,” Rumbley said. “I’m very proud of him.”