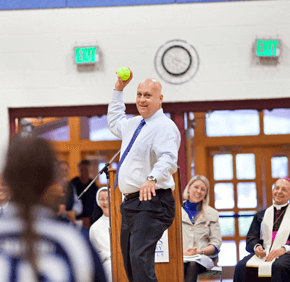 By Elizabeth Lowe
elowe@CatholicReview.org
Twitter: @ReviewLowe
CATONSVILLE – Abby Zalucki, Mount de Sales Academy’s starting varsity softball catcher, made the catch of her life April 29 when she caught a ball thrown to her by Baseball Hall of Famer and  former Baltimore Oriole Cal Ripken Jr.
“I was like ‘I better catch it,’ ” said Zalucki, 16. “It was really special who was throwing it.”
Ripken and Baltimore Archbishop William E. Lori were at the school to celebrate and bless Mount de Sales’ athletic improvements, which cost $1.7 million. An artificial turf field was added, which includes a softball diamond and bleachers. The project was funded through donations and part of the school’s capital campaign.
Construction began in May 2012 and was completed in three months, before fall sports tryouts.
To view a slideshow of the event, navigate the arrows below.
Interested in purchasing any of these photos? Click here.
.
Physical education classes and teams that may not typically use the field – such as the school’s cheerleading team – use the Sailors’ new facility.
Fields, Inc. and Ripken Design, in which Ripken is owner and chief executive officer, were integral in creating the design, according to information from the school.
“It’s harder to throw a softball than a baseball,” Ripken told the Catholic Review. “There was a lot of pressure on me.”
Ripken told the nearly 500 people in the school gymnasium – festivities were moved indoors because of rain – that leadership, “it’s not about playing the role of the leader. Leadership is about helping and it’s about directing. Leadership is about truly helping and establishing trust with another person.”
Archbishop Lori headed outdoors and stood at the top of the field to bless it amidst April showers.
“Use your baseball arm,” said Dominican Sister of St. Cecilia Mary Thomas, the school’s principal, to the archbishop.
“We need more rain,” Archbishop Lori quipped.
Gene Williams, athletic director at Mount de Sales, previously told the Catholic Review the new facility “shows our commitment to moving forward not just athletically, but academically. If there’s potentially a student-athlete on the fence between two schools … (hopefully it) would make a difference.”
“It (the turf) makes a difference, especially with field hockey,” said senior Julianna Shearer, who runs indoor track and plays varsity field hockey and lacrosse. “You don’t have to worry about divots in the field. It definitely changes the game. It makes our campus more inviting to girls coming in.”
“It adds a home field feel,” said junior Eve Lukowski, who plays varsity field hockey, basketball and lacrosse. “It adds a lot to the aesthetics of our campus.”
“There’s really no comparison” between grass and turf fields, said Mary Gagnon, Mount de Sales’ lacrosse coach, in a previous interview with the Catholic Review. Turf is “extremely important” in the IAAM A Conference, which she called one of the most competitive leagues in the country.
“If you want to stay competitive, you have to have one,” Gagnon said. “We’re more competitive because we’re going to have more practice time available. The girls are happier, too. They love that we have the turf.”
Turf fields allow games and practices to continue in any weather event, barring thunder and lightning. Even snow melts quicker on turf than grass.
With a turf field, Williams doesn’t need to use a drying compound after heavy rains.
To see more articles on Catholic education, click here.
Copyright (c) April 29, 2013 CatholicReview.org
PrevNext