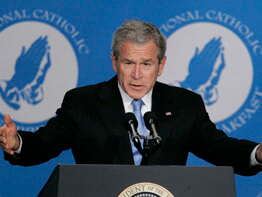 “America’s Catholic schools play a vital role in our nation. The schools were built by poor immigrants, they were staffed by legions of dedicated nuns, brothers and priests – and they have given millions of Americans the knowledge and character they need to succeed in life,” Bush said.

“Today, these schools are also serving thousands of non-Catholic children in some of nation’s poorest neighborhoods. I appreciate the tremendous sacrifices that many dioceses are making to keep their inner(-city) schools going. I am worried that too many of these schools are closing – and our nation needs to do something about it,” the president added to applause.

Referring to the D.C. School Choice Incentive Act, which created a voucher fund to give about 1,700 low-income District of Columbia parents whose children were in low-performing public schools an opportunity to enroll the children in nonpublic schools, Bush said, “I will continue to work to help these schools reach more children in need, so that our children have the skills they need to realize the full promise of the United States of America.”

On the subject of immigration, Bush said to the 1,600 gathered for the breakfast that “we must have” a national policy “that enforces our laws and upholds the dignity of every single person in the United States. And now is the time for the United States Congress to get a bill to my desk that I can sign.”

Bush’s only reference to the Iraq War was asking his audience to “pray for our soldiers and their families in harm’s way. And I ask that you pray that in a troubled world America may always remain a beacon of hope and of freedom.” He added, “I am in awe of people like Cpl. Michael Blair,” a Marine who was wounded by an explosive device last May in Iraq and who led the audience in the recitation of the Pledge of Allegiance.

At the conclusion of Bush’s remarks, an unidentified woman was led out of the hotel ballroom where the breakfast was being conducted after she shouted at the president.

Archbishop Donald W. Wuerl of Washington, the breakfast’s keynote speaker, noted in his talk, “Religious Faith and Our National Identity,” how many federal social policies first enacted in the 1930s could be traced to “Rerum Novarum,” Pope Leo XIII’s encyclical that ushered in the era of Catholic social teaching.

“Today our struggle is to achieve the same success using Pope John Paul II’s encyclical, ‘Evangelium Vitae,’ and the church’s teaching tradition on the dignity of life in the defense of unborn human life,” Archbishop Wuerl said.
He said the Pilgrims, before they embarked on the Mayflower in 1620, entered into the Mayflower Compact, in which they “determined that they would recognize two principles by which their freedom would be guided: the law of God and the common good.”

Today, “what faith brings to our world is a way of seeing life and reality, a way of judging right and wrong, a norm against which we can see our life measured in light of the wisdom of God,” Archbishop Wuerl added. “We simply cannot put aside all of this conviction of how we live and make important decisions and still be who we are as Catholics and as heirs to the American dream of personal freedom, faith and the common good.”

Introduced from the podium were Chief Justice of the United States John Roberts and Associate Justice Samuel Alito of the Supreme Court, Kansas City Royals baseball player Mike Sweeney and Stephen McEveety, one of the producers of the movie “The Passion of the Christ.”