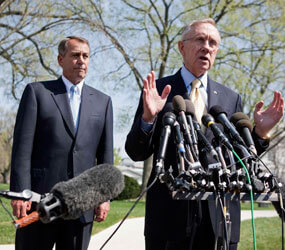 WASHINGTON – As the political debate surrounding the country’s spending priorities, tax policy and reducing debt deepens, the faith community and social service advocates have mounted a campaign to prevent the needs of the poor and vulnerable from being heaped into the pile of expendables.

The effort is rooted in the biblical call for justice for people on the margins – children, the elderly, the sick, the poor. Nonreligious groups also have invoked the values theme in their messaging.

Employing tactics from a rolling fast involving 36,000 people – including 27 members of Congress – to town hall meetings, the broad-based effort has stressed that spending priorities must reflect basic moral principles.

“The meeting of needs for those who can’t meet their own is the gold standard for a moral economic system,” noted Daniel K. Finn, professor of economics and theology at St. John’s University in Collegeville, Minn.

The advocates’ main concern is that the cuts approved by Congress April 14 disproportionately target programs benefiting the poor. For example, the U.S. bishops’ Office of International Justice and Peace and Catholic Relief Services compiled a list of 17 poverty-focused international humanitarian programs that accounted for 0.6 percent of the U.S. budget (almost $20 billion) but originally were targeted for about 25 percent of the cuts.

In the end, the revised spending plan adopted by Congress cut $38 billion from the 2011 budget. It’s the largest one-year reduction in discretionary spending in U.S. history.

Left in the budget was about $75 million in funding for Planned Parenthood, the country’s largest abortion provider. Cardinal Daniel N. DiNardo of Galveston-Houston, chairman of the U.S. bishops’ Committee for Pro-Life Activities, asked Congress in an April 13 letter to defund the agency.

“Congress will have to make decisions whether to cut programs that everyone agrees are beneficial because of a consensus that the federal budget can no longer sustain the current level of spending,” he wrote. “Whether to fund the largest abortion network in the country is not one of those hard choices.”

As for cuts that were approved, Republicans said difficult choices had to be made to rein in spending in the face of a $14.3 trillion debt. Democrats argued that deep cuts would stifle the gradual economic recovery and especially harm women and children.

While the advocates for the poor are hardly claiming victory, they believe their effort helped pre-empt even deeper cuts.

“The bishops were relieved the cuts were not nearly as deep as originally proposed,” said Stephen Colecchi, director of the bishops’ Office of International Justice and Peace.

The recent machinations were an inkling of what’s to come. Next up: the 2012 budget and more maneuvering to determine government’s role in American life.

“Most fundamentally the budget is a moral document … in the sense that it’s going to attach fundamentally to what we believe to be priorities,” he told Catholic News Service.

“At the top is the responsibility to care for the poorest and most vulnerable in our society. What is important is to identify these priorities and then you begin to address the issue of budget adjustments,” he said.

Bishop Blaire also suggested that lawmakers look at all areas of the budget for possible cuts and seriously consider ways to boost tax revenues.

The California bishop joined Bishop Howard J. Hubbard of Albany, N.Y., chairman of the bishops’ Committee on International Justice and Peace, in a letter to each House member April 13 pointing to the moral imperative of budget decisions.

The letter was partly a response to the budget outline and debt relief plan proposed April 5 by Rep. Paul Ryan, R-Wis., a Catholic who chairs the House budget committee. Ryan claimed his plan, “Path to Prosperity,” would reduce U.S. debt by $6.2 trillion in the next decade while strengthening the social safety net.

The proposal would reshape Medicaid and Medicare and rescind much of the Patient Protection and Affordable Care Act to achieve savings.

President Barack Obama’s proposal for debt reduction was not yet introduced when the bishops sent their letter to Congress.

Made public April 13, the president’s plan calls for boosting taxes for the top 2 percent of wage earners, cutting waste and duplication in defense spending, and maximizing savings under the health reform act. Obama claimed his plan would lower the debt by $4 trillion by 2023.

Bishop Blaire told CNS he thought the Ryan plan would reduce access to health care for the poor and elderly if it became law.

Father Larry Snyder, president of Catholic Charities USA, echoed the same concern even as he welcomed efforts to reduce the deficit.

“Simply repackaging responsibilities for the administration of existing programs continues to miss the opportunity for true reform that has the potential to both aid the country’s nascent economic recovery and enable those most vulnerable among us to establish a stronger path to self-sufficiency,” Father Snyder said in a statement April 11.

Ryan’s plan calls for converting Medicaid into a block grant program for states beginning in 2015 with increases in spending adjusted only for inflation and population growth.

Medicare, under Ryan’s proposal, would become a voucher system for people who turn 65 in 2022 (and 67 in 2033), and shift much of the program’s costs to seniors. The Congressional Budget Office said a typical 65-year-old with private insurance covering standard Medicare benefits could pay for 61 percent of total health care costs in 2022, rising to 68 percent by 2030.

Ryan also called for reducing the highest tax rates – those for the highest income earners – from 35 percent to 25 percent and for closing loopholes, limiting tax deductions and ending most tax credits to make up the difference.

Roberton Williams, a senior fellow at the nonpartisan Tax Policy Center, told CNS that Ryan’s plan would reduce tax revenues by about $2.9 trillion between 2012 and 2021. He said he found Ryan’s proposition short on specifics on how the tax base would grow.

Ryan’s office took a phone call from CNS but did not provide a spokesman to discuss the plan.