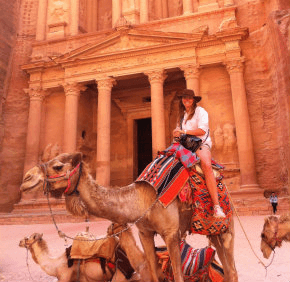 By George P. Matysek Jr.
gmatysek@CatholicReview.org
Twitter: @ReviewMatysek
On the exact spot where some believe David may have slain Goliath, Marylynne Sitko spent a month investigating pieces of 3,000-year-old broken pottery. The 18-year-old parishioner of Our Lady of Hope in Dundalk was part of a team participating in an archaeological dig at Tel Burna, a large mound filled with remnants of past civilizations and located approximately 40 minutes from Jerusalem.
“There is something remarkable and humbling to know that you are touching objects so ancient and so old in order to try to understand history,” Sitko said in an email interview from Scotland, where the sophomore at Dartmouth College is studying for a semester at the University of Edinburgh Divinity School. “To think King David could have touched the same piece of pottery I uncovered is astounding.”
Sitko, a religious studies and Arabic language major, said the most interesting object uncovered at the Tel Burna dig was a female idol.
“This was particularly shocking to me because it was actual evidence that indeed many of ‘God’s chosen people’ had broken the very Commandments which he gave to them,” said Sitko, a 2012 graduate of the Institute of Notre Dame in Baltimore. “This made the theology and the culture all the more puzzling and challenging to understand.”
Sitko worked at the dig for several weeks in June, also engaging in interfaith dialogue with her Jewish colleagues. She traveled throughout Israel with Dartmouth’s chaplain, partaking in an all-night vigil at the Church of the Holy Sepulcher.
“I sang in Latin with the Franciscans – the keepers of the Holy Land, broke bread with the Greek Orthodox and chatted with the Armenian patriarch of Jerusalem,” she said, noting that she got to practice her Arabic during a trip to Jordan. Throughout her time in the Holy Land, Sitko said, she was heartened by the generosity of Muslims, Armenian Orthodox, Greek Orthodox, Lutherans and Mormons she met along the way.
Upon returning to the United States, Sitko gave a presentation on the dig for children at Our Lady of Luke-St. Luke School in Dundalk. She is a member of the school’s Class of 2008.
The budding Indiana Jones’ interest in archeology goes back to her childhood. Sitko had always been captivated by stories of ancient Egypt, she said, and she became intrigued by the thought of studying the past in the actual places where events took place and with prominent scholars in their respective fields.
“Archeology is really a perfect balance between theology and history,” she said. “It concretizes the places and theories one reads about.”
Sitko hopes the discipline helps her understand past civilizations so that she can be better equipped to partake in dialogue with people of all faiths “to create peace and understanding for the future.” She plans to complete a doctorate in religious studies or theology before pursuing a career in international relations.
“The Holy Land is a beautiful place to learn about what is really happening in the Middle East and growing in faith,” she said.
Also see:
Tom Clancy, 66, was supporter of Catholic education
Ovarian cancer gets special treatment at Mercy
PrevNext