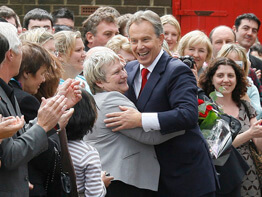 While they commended Blair for helping to secure peace in Northern Ireland, church leaders also raised questions over the wisdom of taking Great Britain to war in Iraq.

Cardinal Cormac Murphy-O’Connor of Westminster, president of the Catholic Bishops’ Conference of England and Wales, said in a statement May 10 that he recognized the “serious divisions of opinion on the war in Iraq,” but added that “history will make a better judgment than today.”

Cardinal Murphy-O’Connor thanked Blair “for his dedication and whole-hearted commitment to the service of his country.”

“In particular, I would warmly commend his efforts in securing peace in Northern Ireland and his constant concern for the eradication of poverty in Africa,” he said.

However, the bishops’ Catholic Agency for Overseas Development said Blair had failed to meet expectations in the fight against extreme poverty.
The British government under Blair delivered more aid and worked to use it more effectively, but ultimately “delivered generosity but not justice,” CAFOD said in a statement.

CAFOD added that “disappointments, alongside the undeniable achievements, spring partly from the high hopes and ambitions with which Tony Blair came to power … and partly from the leaking away of international influence that has dogged the prime minister since the invasion of Iraq.”

Blair, who became prime minister in May 1997, told Labor Party members at the Trimdon Labor Club in his constituency of Sedgefield, England, that he would step down June 27. Blair told supporters, many of whom have grown disillusioned with the war in Iraq, that he did what he “thought was right for our country.”

He said he has known Blair since 1983 and that they later became tennis partners and good friends.

“He used to come every Sunday to Mass,” the priest said. “He didn’t receive holy Communion but would read the lesson and do all sorts of things.”
Anglican Archbishop Rowan Williams of Canterbury described Blair as a man of “genuine personal faith” who has not “shied away from the risk associated with confronting extremism.”

He said that the Church of England is grateful that Blair “has refused the demands of some to close down the space in our society within which both vigorous debate and the full diversity of religious conviction can find voice and be expressed.”

“There have naturally been differences of vision and judgment between the prime minister and the Church of England, not least over the Iraq War, but he has been consistently willing to allow these disagreements to be voiced and discussed openly,” Archbishop Williams said.

He added that the current reinstatement of a power-sharing government in Northern Ireland “bears witness to one of his most enduring achievements, and the high profile given to development issues, especially in Africa, and to the environmental crisis reflects the passion and intelligence he has brought to his work as prime minister.”

A new leader will be elected June 24. Blair’s premiership has witnessed an era of growth, high employment and low interest rates, but opinion polls have indicated that the Labor Party will lose to the Conservative Party at the next national election.