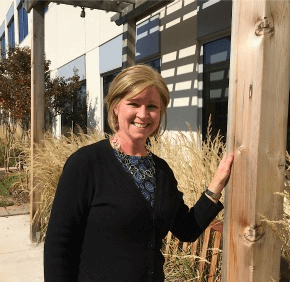 By Mary K. Tilghman
Special to the Review
A mammogram didn’t catch the lump under Kathie Strobel’s breast – not even the mammogram taken after she had discovered it in the shower.
“I was scared once I found it,” she said, adding that its location near her rib made it unlikely a mammogram would detect it.
At first, her doctor didn’t think it was anything to worry about, and Strobel knows she could have breathed a big sigh of relief and forgotten about it.
“I could’ve just dropped the ball at any point,” she said.
But she didn’t – and a biopsy for the acorn-sized lump indicated it was malignant.
“No single modality is 100 percent perfect for detecting a cancer,” said Dr. Diana Griffiths, medical director of the Breast Center at St. Agnes. She said that while mammograms find the majority of tumors, doctors often use other methods, including ultrasound and biopsy to find them.
Monthly self-exams help women become aware of their own bodies so they can detect a change that may signal a need to contact their doctor, according to Griffiths.
“It doesn’t cost anything to do it,” she added.
Strobel spoke to the Catholic Review in October, Breast Cancer Awareness Month.
The 56-year-old parishioner of Church of the Resurrection in Ellicott City considers herself a survivor. The mother of three and grandmother of two with a third on the way, she is nearing the end of her treatment – one year after she found that lump in October 2014.
Before her treatment at St. Agnes Hospital, Strobel already felt a connection to the place. She was born there, as were her three children. Her husband of 32 years, David, is the hospital’s chief of dermatology.
She considered other options but chose St. Agnes Cancer Institute, which expanded in 2013.
“All you have to do is show up,” she said. “They hold your hand the whole way.”
From the nurse navigator who explains the tumor and treatment to the social worker who checks on financial assistance or transportation needs to the second opinion surgeon and radiation oncologist, she got answers she needed. And it all happened on her first day at the hospital.
“That was an exhausting morning,” Strobel said.
Strobel had six chemotherapy infusions from November 2014 to last March, with a lumpectomy in April, followed by 33 radiation treatments. She has continued to return monthly for one cancer drug infusion. Her last is scheduled for Nov. 11.
It wasn’t easy, as Strobel became weak and lost her appetite as well as her hair.
“The chemo was miserable,” she said. “I wanted to be myself again.”
But from the first chemotherapy treatment, she was encouraged.
“After the first chemo infusion, I could feel my tumor was smaller,” she said. “After the first treatment, I said, ‘I quit!’”
By the time of her surgery it was completely gone.
Strobel is grateful for the support of family and friends. Her mother, Shirley Foster, came from her home in Easton to drive her to chemo sessions.
“I loved having her and appreciate her doing that,” said Strobel, who had other familiar faces take her to other treatments. “That’s when you realize who your friends are.”
“Everybody was praying for me,” said Strobel, who has received prayer cards, prayer shawls and rosaries. She is grateful for so much spiritual support – and she thanks anyone who tells her she was in their prayers.
“It worked; I always say thank you because it worked,” she said. “I think I just put it in God’s hand and said, ‘It is what it is.’”
See also:
Little Sisters of the Poor celebrate chapel’s renovation with Archbishop Lori
Feet for Francis shoe drive resonates with K-8 students
Women gather for spiritual renewal
PrevNext