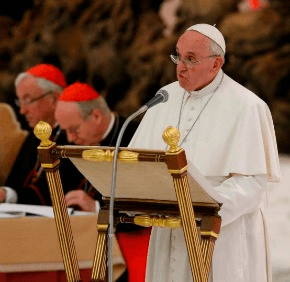 VATICAN CITY – Members of the Synod of Bishops on the family agree that Catholic families are the beating heart and busy hands of the church, but the tensions in the synod hall demonstrate that what they don’t agree on is a vision of the church and its primary attitude to the world.

As the Catholic Church marked the 50th anniversary of the close of the Second Vatican Council – the last session was held Sept. 14-Dec. 8, 1965 – debates within the synod indicated that reflections on the council have shifted from differences over the meaning of individual council documents and moved on to its general vision of the structure of the church and the relationship of the church to the world.

“The discussion is about the future of the church,” German Cardinal Reinhard Marx told a group of reporters Oct. 20. Some synod members seem to view the church as “a castle to be defended, surrounded by enemies. That I can’t understand,” he said. “The church is a sacrament in the midst of people,” reaching out, challenging, bringing healing.

The synod highlighted the fact that the family is at the very heart of the church: The family is where the faith is lived and passed on and where the Christian community most strongly impacts and is impacted by the surrounding society.

As pastors, members of the synod were wrestling, for example, with the questions of Communion for the divorced and civilly remarried and with how best to respect the dignity of homosexual persons while defending marriage as a union of one man and one woman for life.

But none of the bishops thought the questions ended there.

A church living in the midst of the people obviously is challenged by the variety of cultures those people represent. Maintaining unity while responding to diversity and even learning from it has been a task the Christian community has struggled with from the beginning, and not always successfully. The dangers are real.

From the beginning of the synod, members discussed the possibility that in a truly universal church, some pastoral approaches to particularly important questions could be tailored to local situations.

Members of the synod’s German-speaking small group said outreach to the divorced and civilly remarried was one of those situations. But English Group A, which had Australian Cardinal George Pell as its moderator and U.S. Archbishop Joseph E. Kurtz as its recording secretary, said leaving a matter that touches on the indissolubility of marriage up to individual bishops’ conferences “would risk harm to the unity of the Catholic Church, the understanding of her sacramental order and the visible witness of the life of the faithful.”

English Group D, led by Cardinal Thomas C. Collins of Toronto with Archbishop Charles J. Chaput of Philadelphia as secretary, reported that in their group, “One bishop said that the issue of admitting divorced and remarried persons without an annulment to Communion was such a vital matter of doctrinal substance that it could only be handled at an ecumenical council and not at a synod.”

Australian Archbishop Mark Coleridge of Brisbane, who has become a must-read blogger during the synod, wrote Oct. 22, “For me personally, one real fruit of the synod has been a deeper and richer understanding of synodality in the life of the church,” particularly the way Pope Francis explained it in a speech Oct. 17 as a style of “journeying together” with everyone — the pope, bishops, priests and laity — listening to, teaching and learning from each other.

“The pope spoke of synodality as a permanent feature of the life of the whole church rather than an occasional feature of episcopal life – and went on to set episcopal collegiality and the Petrine ministry within this context,” Archbishop Coleridge said. “This struck me as a deep and simple articulation of the vision of the church found in the teaching of Vatican II, and it made sense to me for the pope to say that this is where God is leading the church as we launch into the third millennium.”

Pope Francis insisted in that speech Oct. 17 that “it is not advisable for the pope to take the place of local bishops in the discernment of every issue which arises in their territory. In this sense, I am conscious of the need to promote a sound ‘decentralization.'”

However, he did make it clear that, in the end, he is the pope and has the responsibility “to speak as ‘pastor and teacher of all Christians,’ not on the basis of his personal convictions but as the supreme witness” to the faith of the church and as “the guarantor of the obedience and the conformity of the church to the will of God, to the Gospel of Christ and to the tradition of the church.”

Cardinal Daniel Sturla Berhouet of Montevideo, Uruguay, posted a comment on Facebook Oct. 13 saying, “The difficulties that are encountered in the synod process because of the diversity of opinions and of sensibilities are those of any living organism, and they can be shared precisely in the certainty” that the pope will give the final word and keep them united.

Promises must be made in freedom, honored with sacrifice, says pope

Families have a mission in the church, archbishop says