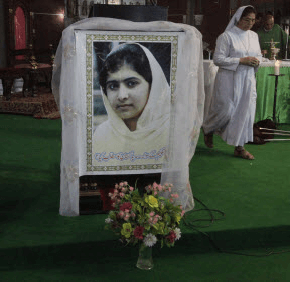 The tragic assassination attempt in Pakistan against 14-year-old student Malala Yousafzai, merely because she is a female who spoke out for women’s right to education, is a disturbing reminder that there are places in our world where an educated woman is considered a threat. While Malala is making strides toward recovery and the world has honored her fight, the fact remains that an estimated 32 million young women globally are denied access to education. Sadly, the horror of Malala’s suffering, and the global condemnation it has produced, gave no pause to Taliban terrorists who have continued their assault against girls seeking education in Pakistan, most recently through the resumption of acid attacks.

The fact that these atrocities are occurring in a nation that 24 years ago elected Benazir Bhutto as the first female prime minister of a Muslim country is a potent reminder that progress for women does not always proceed linearly. Here in the developed world, we find false comfort in the notion that women’s progress is assured, yet to paraphrase President John Kennedy in his major speech on civil rights, the rights of women everywhere are endangered when they are threatened anywhere.

We write as the provincial leader of the Atlantic-Midwest province of the School Sisters of Notre Dame and as the president of one ofour order’s three sponsored universities, Notre Dame of Maryland University. We see this tragedy as affirmation that our mission to educate women leaders remains vital, and is as necessary today as it was when our order was founded in 1833 and when Notre Dame of Maryland was established as a Catholic college for women in 1895.

Today, School Sisters of Notre Dame remain dedicated to educating women globally, as we have for almost 180 years. Across five continents, more than 3,200 sisters, associates, and friends of SSND are working for justice, peace, and the realization of shalom, the Hebrew word for peace that implies restoring all things to their right order and original integrity. The call of our foundress Blessed Theresa Gerhardinger to follow the Gospel mandate has taken us to the poverty-plagued streets of America’s cities and has inspired our work with women and children in Nepal, South Sudan, East Timor and dozens of other nations in need. The millions of Malalas around the globe bring urgency and resolve to our role as a non-governmental organization working with the United Nations on issues of gender equality and the advancement of women.

Our university, which was founded on the radical notion that educating women can transform the world, seeks to prepare compassionate leaders who will change lives. Today, Notre Dame welcomes women students from all over the world, including nations where the roles of women are narrowly defined and their educations restricted. Here they can learn in a safe, respectful environment, and then return to their home countries prepared to expand opportunities for their gender and their societies. Despite American culture’s often dismissive attitude toward the continuing relevance of women-only educational institutions, we are firm in insisting that our distinctive model matters and proud that we continue to produce women leaders in disproportionately large numbers. Although we offer opportunities for both genders to earn a Notre Dame degree, we maintain as our institutional foundation a traditional age, full-time, women-only undergraduate college. We do so because we recognize that our women’s college possesses our institutional DNA, and speaks forcefully to the fundamental right of young women everywhere to be educated and the enduring power of education to transform lives.

The threat that Malala represents to some proves that the work of our order and our university is far from complete. Malala’s forceful voice exhorts us to be vigilant in protecting the rights we have won and fervent in eliminating the barriers to opportunity that persist. Whether it is in the Third World or the First, the essential work of educating women for leadership must never be considered accomplished, because sadly, the force of ignorance is never fully vanquished.