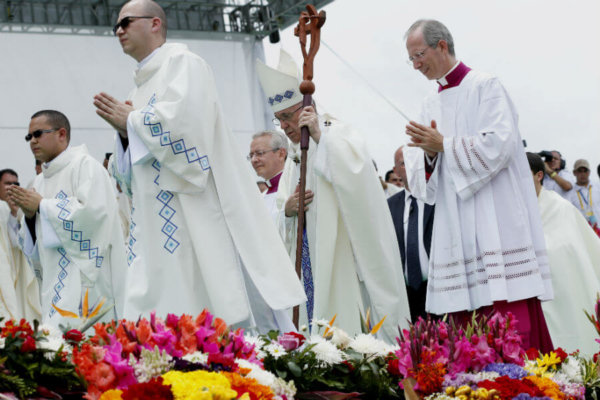 MEDELLIN, Colombia — In a city many think of as being synonymous with new directions for the Catholic Church, Pope Francis told Colombian Catholics faith is not measured by how well they follow rules, but by the depth of their prayer life and the degree to which it pushes them to share the Gospel.

The pope’s visit to Medellin Sept. 9 began so wet and so foggy that he was forced to travel the 30 miles from Rionegro airport by car rather than helicopter. The change in plans meant the Mass began 45 minutes later than scheduled.

But by the time the service did begin, the rain had stopped and the fog had begun to lift, providing a clear view of the city’s skyscrapers and the lush green mountains beyond. Before the opening prayer, Pope Francis apologized for the wait and thanked the estimated 1.3 million people for their patience.

The bishops of Latin America met in Medellin in 1968 and formally committed themselves to a “preferential option for the poor,” to the support of small Christian communities and to a Gospel-based reading of their social and economic realities. While their commitments were rooted in the teaching of the Second Vatican Council, their focus on Latin America’s concrete situation marked a sharp change in direction.

In his homily in Medellin, Pope Francis said that when Jesus’ disciples first began following him, they had to go through a process of conversion and purification, changing the way they saw the relationship between Jewish law and faith in God.

“Some of the precepts, prohibitions and mandates made them feel secure,” the pope said. “Fulfilling certain practices and rites dispensed them from the uncomfortable question: ‘What would God like us to do?'”

Following Jesus and sharing the good news of salvation in him, he said, means leaving one’s comfort zone and going out, encountering others and concretely showing them God’s love.

“It is of the greatest importance that we who call ourselves disciples not cling to a certain style or to particular practices that cause us to be more like some Pharisees than like Jesus,” he said.

The law is meant to guide people in doing good and it is not to be ignored, the pope said. But true faith means going deeper, experiencing God’s love, changing one’s life and getting involved in what can improve the lives of others, especially the poor and vulnerable.

“As Jesus ‘shook’ the doctors of the law to break them free of their rigidity,” the pope said, the Holy Spirit “shakes” the church so that its members not settle into a lazy comfort, but are constantly challenged by Christ and constantly reaching out.

“We are called upon to be brave, to have that evangelical courage which springs from knowing that there are many who are hungry, who hunger for God, who hunger for dignity, because they have been deprived,” the pope said.

“We cannot be Christians who continually put up ‘do not enter’ signs,” Pope Francis said, because “the church is not ours, she is God’s. He is the owner of the temple and the field; everyone has a place, everyone is invited to find here, and among us, his or her nourishment. ”