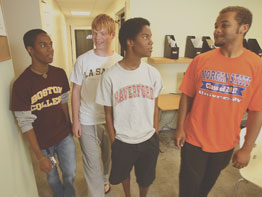 When Marc Franklin first walked through the doors of Boys Hope at the age of 12, he remembers being “scared, but really excited at the same time.”

Now, six years later, the bright-eyed, lanky 2008 Loyola Blakefield, Towson, graduate is experiencing similar feelings of anticipation and nervousness as he prepares to embark on the next chapter of his life – college.

Eighteen-year-old Marc, his twin brother, Michael, 18-year-old David Yeager and 19-year-old Ben James have the distinction of being the first Baltimore Boys Hope participants to graduate from high school and enroll in college.

At Boys Hope, which serves academically capable youths in need and provides them with a value-centered, family-like home as well as an education, the teens had the opportunity to attend Catholic schools within the Archdiocese of Baltimore.

While each young man had different experiences in connection with Boys Hope, all said they were grateful for the opportunities the program offered.

“It’s definitely opened a lot of doors,” said Marc Franklin, who will attend Boston College and be involved in theater. “Going to Loyola (Blakefield) was the best thing ever. I made a lot of invaluable friends, and I had a lot of opportunities and experiences, like with theater. Loyola has a phenomenal theater program, and I probably wouldn’t have been able to foster that.”

Charles “Chuck” Roth, a Church of the Nativity, Timonium, parishioner who has headed Baltimore Boys Hope since 2001, said offering the youths a private school education provides them with a college preparatory curriculum, better access to teachers and an education which “supplements the values, morals and character we try to teach in the home.”

Mr. James, a Loyola Blakefield graduate who participated in varsity track and football and was a member of the black student union, is one of the newest members of the Boys Hope family, visiting the home on weeknights and weekends for the past year. As a non-residential Boys Hope participant, he ate dinner with his peers weekly and took time to complete his computer homework while visiting.

“One of my football coaches told me about (Boys Hope), and I thought it would be a good experience for me,” said Mr. James, who will attend Morgan State University where he plans to study mechanical engineering. “I wanted to do it because at the time, my grades were slipping, and I wanted to find a way to improve. So I came and checked it out, and I liked it.”

Mr. Yeager, a graduate of Archbishop Curley High School in Baltimore, is extremely excited to see what Philadelphia has to offer as he attends La Salle University this fall.

Serving as a National Honor Society student, president of the Spanish club and participant in choir, the student government association and Blackfriars Theater at Archbishop Curley helped prepare Mr. Yeager for his journey to college

Michael Franklin, who participated in theater and chorus at Loyola, said that when he walked around the campus of Haverford College in Pennsylvania, he could “see himself there.”

He said he plans to double major in English and music, and noted that without Boys Hope, he has “no clue what kind of person (he) would be.”

“I think the most important thing is investing in a quality education,” said Mr. Roth. “When you invest in a great education, regardless of where kids come from, if they are motivated and willing to do the work, it is possible for a child who is homeless to become a college graduate.”

He said as he has watched the four young men come through the program, he feels like a parent – four times over.

“Not only were they able to stay in the program for six years, which is a huge accomplishment, but they achieved socially and academically and were able to get into such good schools,” Mr. Roth said.