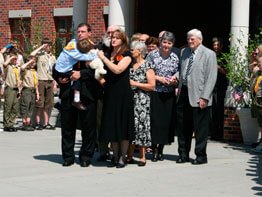 OMAHA, Neb. – Amid a crowd of friends, family, Boy Scouts and Boy Scout leaders, Bryan and Arnell Petrzilka leaned over and kissed their 13-year-old son, Ben, whose body lay in a casket at Mary Our Queen Church in Omaha.

An overflow crowd filled the church for the June 17 funeral of the teen, who attended Mary Our Queen School and who loved outdoor sports, Scouting and his Catholic faith.

Ben Petrzilka and three other Boy Scouts lost their lives when a major tornado ripped through the Little Sioux Scout Ranch near Onawa, Iowa, June 11. The storm also injured 42 people who were huddled inside a cabin on the north side of the camp’s 1,800 acres.

One day after the tragedy, a candlelight vigil service for the survivors and victims took place at the Boy Scouts’ Mid-America Council offices in Omaha. At least 200 people attended the event, including Jesuit Father John Schlegel, an Eagle Scout and president of Creighton University in Omaha, who led the prayer service.

Funeral services for the four teenage victims took place the week of June 16 in Omaha and West Point. In addition to Ben, the victims were Aaron Eilerts, 14; Josh Fennen, 13; and Sam Thomsen, 13.

Aaron also was Catholic, and hundreds gathered to attend his funeral June 16 at St. Mary Church in West Point, Neb.

In his homily at Ben’s funeral, Father Bob English said the youngster was the type of person who took his faith seriously and was a good friend to everyone.

“He always found a good character trait in everyone and focused on that,” he said.

The priest also said Ben, a member of Mary Our Queen Boy Scout Troop 448, was concerned about people, was considered a natural leader and loved to cook.

“Jesus wants us to be at peace and take the Gospel to heart when it says: ‘Do not let your hearts be troubled. Have faith in God and faith in me. In my Father’s house there are many, many dwelling places,’” Father English said. “Ben is now at one of those dwelling places basking in God’s love, mercy, peace and joy.”

Aaron was an altar server at Sacred Heart Church in Eagle Grove, sang in the Sacred Heart youth choir and taught Bible school.

He was on the “A” honor roll all eight years of school and founded a project called Pillowcases for Patients where he sewed pillowcases for children in hospitals all over central Iowa.

In the homily at his funeral, Father Gerry Gonderinger, pastor at St. Mary Church, spoke of the mystery of God’s plan.

“I wish I could explain to you why God took Aaron from the world. Here is a young man who is one of our finest, who found great joy in service and giving of his handiwork to others,” he said. “I cannot explain why one so dedicated to community service and Scouting, why such a giving person, why one so full of future promise would be snatched from us. … We cannot understand.”

God works through tragedies, he said, and he can produce good from the greatest tragedies.

“We do not know what good God will produce from this great loss and this suffering,” Father Gonderinger said. We do not yet know what plant will be watered by all these tears, but we trust that the resurrection of Jesus, which transformed Jesus’ suffering into triumph, will also transform this pain,” he said.