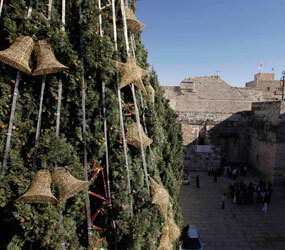 BETHLEHEM, West Bank – With five new hotels in the works, a handful of new souvenir shops opening recently and nearly 40 restaurants able to serve crowds from 100 to 1,000, the Bethlehem economy is showing signs of recovery following the desperate intifada years.

For the first time in years, shop owners and tourist industry workers in the birthplace of Christ are optimistic and have confidence in the economy. For most, 2010 was the best year for business in a decade.

Outside the Church of the Nativity in mid-December, Nigerian pilgrims snapped pictures of each other as Russian pilgrims made their way into the ancient church through a small entranceway. Inside, groups waited patiently at the stairway leading into the grotto where tradition holds that Jesus was born.

“Coming to Bethlehem is always an exceptionally emotional experience,” said Father Filiberto Barrera, who led a group of Californian and Mexican pilgrims as they left the grotto to make room for another group. “We feel extremely safe here; the police outside are doing their job well.”

But the lines in the week before Christmas were modest compared to those of late November, the high season for tourists. Pilgrims waited up to two hours in a line that wound outside the historic church, said street vendor Khaled Omar, 47, who has been working in the tourist business for 33 years.

“Thank God, it has been a good year,” Omar said with a broad smile as he arranged embroidered tote bags and colorful beaded necklaces along a wall next to the church.

Some 10,000 pilgrims and tourists were expected to come through Bethlehem for the Christmas holiday, said Samir Hazboun, chairman of the board of the Bethlehem Chamber of Commerce. He said hotels in the Bethlehem triangle – with 2,750 rooms – are reporting full occupancy.

The Church of St. Catherine, where midnight Mass celebrates Christ’s birth, can accommodate a maximum of 2,000 worshippers. Hazboun said most pilgrims will spend the evening with local residents, celebrating outside the church in Manger Square.

“We are seeing this as good news to the region,” he said.

He said the unemployment rate has steadily declined since the end of the second intifada in 2005, when 45 percent of residents were out of work. Today, Hazboun said, unemployment has been cut in half thanks to government incentives and tax cuts that have led Palestinian investments to flow into the city again.

Deputy Mayor George Saadeh partially credited the influx of tourists to the “very good” security situation. But all is not perfect, he said as he stood next to the Israeli separation wall several hundred yards from a checkpoint in an area that is under full Israeli control.

“There is a respect for law and order despite lots of things trying to sabotage this,” Saadeh said, explaining that Palestinian police are prevented from wearing uniforms in some areas and “the Israeli side is not really committed to doing what needs to be done.”

He said he hoped that when the tourism data for 2010 is compiled, it will show that Bethlehem welcomed 1.5 million visitors.

Statistics from the Israeli Ministry of Tourism project that about 2.4 million Christian pilgrims will have visited Israel by the end of 2010, almost double the number in 2009. The great majority of Christian pilgrims also visit Bethlehem, the ministry said in a press release.

However, for years, Palestinians in the tourism industry have complained that most pilgrims are shuttled in and out of the city, quickly visiting the Church of the Nativity and a few select souvenir shops or restaurants. They have said such short visits limit the opportunity for pilgrims to patronize smaller shops and eateries.

The Palestinian Ministry of Tourism and Antiquities believes tourists and pilgrims must stay for a minimum of three to four nights in Bethlehem to effectively contribute to the growth of the Palestinian tourism industry.

Palestinians also are unhappy with the Israeli requirement that all tourists enter the city through the main Israeli checkpoint at the entrance to Bethlehem. The rule effectively circumvents a 10-year-old Palestinian plan to have visitors bused in through nearby Beit Jalla and into Bethlehem via the historic Star Street in the Old City. The route would have tourists walking to the Church of the Nativity, passing shops that were forced to close when the number of visitors fell dramatically between 2000 and 2005.

The spokesman for the Israeli Civil Administration said beginning Dec. 19 several thousand local Christians would be issued special one-month travel permits for the Christmas season, which includes the Catholic, Greek Orthodox and Armenian celebrations. The permits allow them to travel through the checkpoint into and out of Bethlehem to visit friends and family in other cities.

Barring security restrictions, the spokesman said, anyone requesting a permit, including several hundred Christian Palestinians from the Gaza Strip, would be issued one.

He said several hundred Palestinians were expected to be permitted to travel abroad using the Ben Gurion International Airport near Tel Aviv rather than having to travel over land to Amman, Jordan.

Israeli officials also planned to allow about 200 Palestinian Christians living in Arab countries to visit their families in Israel after obtaining a monthlong permit.