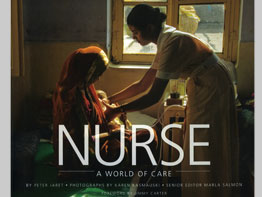 WASHINGTON – The following books are suitable for Christmas giving:

– For the Vaticanista in the house:

Part photo essay, part tour book, this fine offering by DK, the publishing company that makes travel so easy with its Eyewitness guides, gives the reader unprecedented access to parts of the Vatican that most will never see. It begins with a map of this small country and a very succinct history of the church and the popes. This book is richly illustrated with art and photographs seen only in this book. The mission of the church through the travels of the Holy Father is well-documented and the breathtaking Renaissance architecture, art and treasures are illustrated with great detail. Father Collins, an Irish priest who studied and taught in Rome universities for many years, shows you a day in the life of the Vatican. He features not only the liturgical aspects but all of the work that goes on behind the scenes by so many of the laypeople who contribute to the working Vatican – the art restorers, the papal photographer, the choir boy, the Swiss Guards. It’s an insider’s look but with a fresh perspective. (KN)

– For the European traveler in the family:

This guide by the founder and president of the World Religious Travel Association includes 275 places of spiritual retreat in 17 European countries, complete with maps and contact information. Even those not especially interested in the spiritual aspects of the guesthouses will find historical information and clean, comfortable accommodations, usually priced in the moderate range. Wright also includes a brief history of Christian monasticism, a “who’s who” of monastic saints and a dictionary of “monastic lingo,” from abbess to votive office. (NOB)

– For a taste of the Bible, beautifully illustrated:

A lovely prayer book from the tradition of the illuminated manuscripts of the past, the Scripture texts are taken from the New Revised Standard Version Bible and the art from the Saint John’s Bible. It’s smaller than the large-scale format of the splendid books of the Bible created in Collegeville but this prayer book lacks the beautiful full-page illustrations of those volumes. This is meant to be like a Psalter or a Book of Hours, easy to carry and to keep with you for personal prayer. The excellent selection of prayers focuses primarily on salvation, including some you know by heart and others heartfelt. (KN)

– For the home and garden maven:

Trained in art history and now a well-known photographer whose work has appeared in Architectural Digest, Elle Decor, House Beautiful and other publications, Vitale turns his eye toward the relics, shrines, statues and other objects that serve as both religious symbols and design elements in this coffee-table volume. For the book he photographed 30 homes from New York to California and in Mexico. Although much of the art featured in the volume is Christian, there are also collections from the Jewish and Buddhist traditions. Vitale shows how religious art can be integrated into the home without leaving its residents feeling like they are inhabiting a museum or a church. (NOB)

– For healers and those they have helped to heal:

Not all of the photographs in “Nurse” are easy to look at, but each gives the viewer a glimpse into the often-invisible world of nurses around the globe. Combining evocative photos and informative text, the book tells the stories of nurses ranging from field malaria researcher Sister Isolena in Venezuela to family nurse Ann Templeton in a Scottish village to the many “health angels” who help spina bifida patient Lizzy Garcia stay healthy and in school as her family of migrant workers moves from state to state in the U.S. But the volume also highlights what it calls a “looming crisis” – the shortage of trained nurses that is affecting not only many African nations, where the health care system has less than one-third of the nurses needed for basic care, but also developed nations such as Australia. (NOB)

– And some stocking stuffers:

Deacon Sheridan, former editor of the Catholic newspaper in Chicago, says he took encouragement to write a Catholic joke book from Pope Benedict XVI himself, who once said, “I’m not a man who constantly thinks up jokes. But I think it’s very important to be able to see the funny side of life and its joyful dimension and not to take everything too tragically.” Although the corn factor is fairly high for some of the jokes, none are mean or offensive and many will bring a smile of recognition to the faces of Catholics everywhere. (NOB)

This simple pocket-size collection of poems for the Christmas season spans the ages from Virgil and Dante to Whitman and Frost. There are some poems that will be familiar but there are other more modern reflections that will make you think about the chill in the air and times spent with loved ones. Each reminds us of the reason for the season, encouraging the reader to bask in the glow of the star above the manger as if we were all present at the birth of Christ. That indeed is a gift worth giving. (KN)

Quoting from popes ranging from Pope St. Leo I (390-461) to Pope John Paul II (1920-2005) to the current Pope Benedict XVI, this slim volume offers reflections on the Christmas season, from Advent through the feast of the Immaculate Conception to Christmas Eve, Christmas Day and the feast of the Epiphany. (NOB)