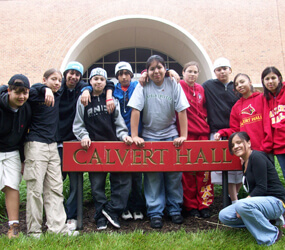 So when the eighth-grader from De La Salle Blackfeet School sat in one of two suites Oriole Park at Camden Yards suites May 12, she could barely contain herself.

The fact that Orioles outfielder Adam Jones hit two home runs in a win over the Tampa Bay Rays made the night perfect.

De La Salle’s eighth grade spent a week in the Baltimore area with Calvert Hall College High School in Towson, which served as host. The two schools are run by the Christian Brothers and De La Salle serves students in fifth through eighth grade.

A graduate of De La Salle paid for the De La Salle flights to Baltimore, while Calvert Hall and others helped take care of their local excursions.

The 11 students stayed at the Monsignor O’Dwyer Retreat House in Sparks.

Seventh-grade teacher Shanna White described her town as “beautiful,” but stricken with poverty. The 1.5 million acre reservation is 13 miles east of the Rocky Mountains.

There are 8,600 members of the Blackfeet in Montana. The majority in Browning is Catholic, according to Brother Paul Ackerman, De La Salle’s president.

Life on the reservation can be challenging. Alcohol and drug abuse, as well as family-on family violence issues are common, Brother Paul said.

“I think there are a lot of institutions in Baltimore set up to help the kids,” Calvert Hall senior Greg Wohlfort said. “In Montana, it’s a couple of brothers out there and that’s pretty much it.”

Brother Paul said social agencies are few and far between.

“What we’ve been trying to do is give them the skills they need to succeed,” Brother Paul said.

The nearest Catholic high school is hours away, and one current student will attend there this fall.

“We take them places,” Parisi said, “and they see there’s no reason they can’t come to a good school, and if they work really hard, get into a good college.”

TO SEE MORE
Students from De La Salle blogged about their trip to Baltimore on Calvert Hall’s Web site, which also features memories from Calvert Hall students of their own trip to Montana. Visit: www.calverthall.com/montana.