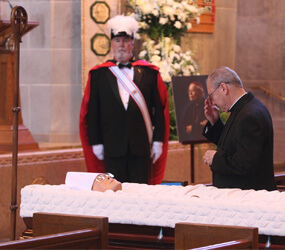 As two lines of Knights of Columbus Honor Guard members stood at attention, the body of Archbishop William D. Borders, the 13th spiritual shepherd of the Archdiocese of Baltimore, arrived at the Cathedral of Mary Our Queen in Homeland April 22.

The body was received on a serene spring morning by Auxiliary Bishop Denis J. Madden and pallbearers, who lifted the former archbishop’s casket and carried it in to the neo-Gothic church.

Friends, colleagues and admirers came to view the man who led the archdiocese from 1974 until 1989. Archbishop Borders died April 19 after a prolonged battle with colon cancer. He was 96.

“My dear friends,” said Bishop Madden during the rite of the reception of the body, “we’ve gathered here this morning in this cathedral to welcome that body, which for 96 years, housed the soul of a most just man. He reflected so well with his life the presence and the benevolence of our loving God.”

Archbishop Borders, Bishop Madden said, was generous, joyful and lived the gospel life of Jesus.
The life of Archbishop Borders touched people who were not even alive during his tenure in Baltimore.
Students from the neighboring School of the Cathedral of Mary Our Queen came to pay their respects.
Sister of Notre Dame de Namur Rosalie Murphy, the former director of collegial services under Archbishop Borders, read from the Book of Wisdom during a brief service. She later wiped away tears as she remembered her friend of 41 years.

“He was able to reach out to people (in a way) that had a very human touch to it,” Sister Rosalie said. “He related to people on that level. It wasn’t so much about hierarchy. He didn’t see himself in that position. I think it made it really easy for people to relate to him.”

Sister Rosalie said that she had recently talked with Archbishop Borders. Despite his own pain, she said, he was upbeat about seeing his longtime friend and was putting his trust in others around him.

“I think he was very faithful to his nature,” Sister Rosalie said. “I think he could look over that pain. That was a higher calling for him. He had a way of looking beyond what is right here.”

The funeral Mass for Archbishop Borders will be held April 23, at 1 p.m. Afterward, there will be a private entombment in the cathedral crypt.