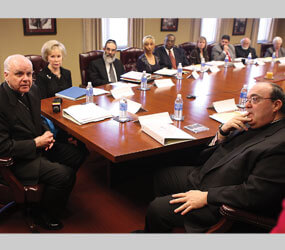 Archbishop Edwin F. O’Brien was surrounded by some of Maryland’s most prominent business and educational leaders as he started the first meeting of the Blue-Ribbon Committee charged with developing a long-term plan for Catholic schools March 18.

“The restructuring of schools, is likely the most important thing I will do in my service as the 15th archbishop of Baltimore,” he said before the meeting at Archbishop Curley High School in Baltimore. “And I can’t think of a more qualified group of leaders to guide me.”

The archbishop added: “This precipitous drop marks an acceleration of the steady declines in enrollment our schools have experienced for several years and, in doing so, shines a bright light on the fundamental financial reality that has a death grip on our schools: namely, that as enrollment drops, tuition must be raised, which leads to a further decline in enrollment.”

Under the direction of chairman Frank Bramble and executive director Monsignor Robert L. Hartnett, the committee will meet several times over the next year to chart a course for schools.

Mr. Bramble is the retired vice chairman of MBNA America and a board member for the Bank of America. Monsignor Hartnett serves as pastor of Our Lady of Mount Carmel parish, Essex, which has both an elementary and high school.

The archbishop has referred to the group as an all-star panel The names and faces in the closed-door meeting are indeed well-known.

Dr. Nancy Grasmick, superintendent for the Maryland state department of education, said she wants to maintain options for families.

“We don’t have a school population that is diminishing,” the state leader said. “As a matter of fact, when we look at some of our independent schools today, because of the economic situation, those children are moving to public schools.”

Dr. Andrés Alonso, chief executive officer for the Baltimore City public school system, is also part of the committee. His expertise could be crucial as he recently announced a plan to restructure his school system as well.

Monsignor Hartnett said the group will do “hard thinking” on schools planning while the division of schools at the archdiocesan headquarters will continue to evaluate the viability of existing schools.

“I think it’s critical for the future of Catholic schools,” Monsignor Hartnett said. “I think if we don’t come up with a plan about Catholic schools that we will be just be separate schools out there struggling to get by and doing individual plans when we could bring our resources together to look for a way to strengthen our schools and make them healthy and more than viable, exciting places to be.”