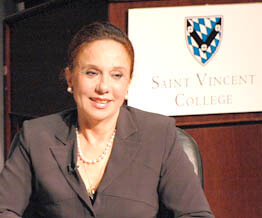 LATROBE, Pa. – Blessed Mother Teresa’s niece told an audience at St. Vincent College in Latrobe Oct. 6 that she remembers her father, Lazar, telling stories about growing up with the older sister who would become the famous nun.

“He was the only boy in the family and he was very naughty,” said Agi Bojaxhiu of Italy. “Mother Teresa tried to protect him when he got in trouble.”

Their mother, who raised the family alone after her husband died, was very strict, according to Bojaxhiu.

“Sometimes when she punished Lazar by sending him to bed without dinner, his doting sister would save half of her food and smuggle it to him,” she said. “She would do his homework for him, too.”

Mother Teresa, the founder of the Missionaries of Charity, was born Agnes Gonxha Bojaxhiu into an ethnic Albanian family in Skopje, in present-day Macedonia. She died in 1997 and was beatified in 2003.

Her niece was one of four relatives and friends who shared stories about her at an evening panel discussion during an Oct. 5-7 conference titled “Remembrances of Mother Teresa of Calcutta by Her Family and Friends.” Bishop Lawrence E. Brandt of Greensburg celebrated the event’s opening Mass.

Another panel speaker was Sandy McMurtrie, who was Mother Teresa’s traveling companion from 1981 until her death in 1997. The single mother of three children, she longed for another child and often asked Mother Teresa to find her an orphan to adopt.

“‘It is not time,’ she would tell me,” McMurtrie said. “Then one day – and she often talked about herself in the third person – she said, ‘Mother would be very happy for you to have this child.’“

She was referring to Maria, a raven-haired little girl, now 24, who also attended the conference.
Film producer Jan Petrie, who, with her sister, Ann, produced two films about Mother Teresa, became her friend as well.

“We had a very emotional time when we went to Albania,” Petrie said.

That was where Mother Teresa’s mother and sister were buried, and the country was legally atheist. Undaunted, the nun insisted that a crucifix be placed to mark the grave where she had their remains relocated together. Shortly thereafter, other crucifixes appeared in the cemetery where before there were none.

“There were so many examples of her being stubborn,” Petrie said.

She was that way, too, when it came to defying advice from Dr. Patricia Aubanel, who took care of her from 1991 until her death.

Toward the end, as her heart and lungs were failing, she insisted on seeing Pope John Paul II one more time. She was in a wheelchair when they met.

“He was waiting for her,” Aubanel said. “He knelt and kissed her head and said, ‘My mother, my mother.’ For her, the Holy Father was everything. They loved each other.”

The pontiff was ill, too, and could barely walk. Yet, at the end of Mass, as Mother Teresa held her face in her hands, he struggled down the aisle to her wheelchair. When she realized that he was there, she got up to embrace him.

“Every single person there was crying,” Aubanel said. “It was the last time they would be together.”

When Mother Teresa returned to Calcutta, India, she told her sisters: “My mission is completed.” A month later, she died peacefully.

“She had so much love,” Petrie said. “She would always say, ‘God bless you, God bless you.’ I feel that blessing all the time.”