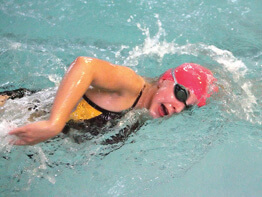 With 40 swimmers and a history of excellence, the Notre Dame Preparatory, Towson, Blazers are out to a 3-0 run (6-0 overall) in the Interscholastic Athletic Association of Maryland’s “A” Conference.

“I knew they were going to be strong when we got started in early November,” said first-year Blazer head coach Terri Byrd.

The team is well-balanced with mostly year-round swimmers and a wealth of senior leadership. The Blazers are led by senior co-captains Maggie Mulderrig and Emma Doerfler.

In a recent dual meet against Mount de Sales Academy, Catonsville, the Blazers and the Sailors were notched at 78 points each going into the final event. It came down to the last relay with both teams battling furiously for the lead but Blazer sophomore Maggie Brown out-touched the Sailor swimmers for the slim 84-82 victory and a continued lock on an undefeated season.
The backbone of the team remains with senior Kate Baust, a distance swimmer, who has remained a top contributor throughout her swimming career at NDP.

Seniors Erin Cammarata, free-styler and flier and sprinter Danielle Capron, have also turned in stellar times for the Blazers this season and both have qualified for the prestigious National Catholic Prep race that takes place in early February.

The Prep is preparing for another tough dual meet Jan. 25 against the McDonogh Eagles as well as the IAAM Championships Feb. 4 at University of Maryland Baltimore County.