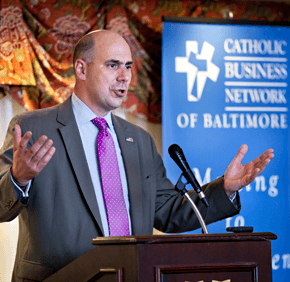 HUNT VALLEY – Before his deployment to Somalia in 1993, U.S. Army 1st Sgt. Matthew P. Eversmann stumbled upon Isaiah 6:8 – a verse that reminded him to put the needs of others first.

It was a message Eversmann embraced in September and October of 1993 during the Battle of Mogadishu in Somalia, when he led a group of U.S. Army Rangers and Delta Force soldiers in Mogadishu.

During some of the scariest times in Somalia – including “a hail of gunfire” – Eversmann said he “heard the voice of God,” to which he quietly responded: “send me, Lord.”

“It’s about selfless service with everything we do,” Eversmann said to nearly 100 people at the Catholic Business Network of Baltimore’s annual dinner May 9 at Hayfield’s Country Club in Hunt Valley.

When he was deployed, Eversmann said he weighed about 225 lbs. and wore 60 lbs. to 70 lbs. of amour while having to slide 10 to 40 feet down a rope out of a Black Hawk helicopter to the ground in Mogadishu.

Eversmann realized that one of his men had fallen while sliding down the rope. He found his comrade’s body on the ground contorted and bloody. He survived. When Eversmann got on the ground, he realized that he and his other soldiers were “taking (gun)fire from the enemy.”

“Someone is looking at you and squeezing that trigger in anger – it’s a horrible feeling,” Eversmann said.

Eversmann said he and other soldiers eventually made it to a car that they hid behind during the gunfire.

Eversmann’s experiences in Somalia were portrayed in “Black Hawk Down,” a 2001 film about the U.S. Army’s quest to capture Somali warlord Mohamed Farrah Aidid. Eversmann – who led a group of U.S. Army Rangers and Delta Force soldiers in Mogadishu – retired from the U.S. Army in 2008 after serving for 18 months in Iraq.

While most people won’t experience 18 hours as a U.S. soldier trapped in Mogadishu, Eversmann said strength, courage, faith, family and friends – and faith – can help anyone through any crisis or difficult time.

“Moral courage is doing the right thing when you’re scared and no one is watching,” said Eversmann, who has received awards including the Bronze Star Medal with Valor device and the Combat Infantryman’s Badge.

The Catholic Business Network of Baltimore is an organization of people, businesses, educators and clergy working to grow spiritually and professionally.

Father Ernest W. Cibelli, associate pastor of St. Joseph, Cockeysville, and the Catholic Network of Baltimore’s spiritual director, said the organization is “such an excellent example of integrating our faith with the rest of our lives.”

“We live out our faith by the everyday things we do,” Father Cibelli said.

Jim Randisi, president and treasurer of the Catholic Business Network of Baltimore, said in an email Eversmann’s “message of selfless service, courage and duty was appropriate for all of us in general, but in particular for Catholics.”

“We need to be unafraid to act as true disciples of Jesus Christ and announce the Gospel in word and in action,” Randisi said.

The Catholic Business Network of Baltimore meets on the fourth Friday of each month, from January to October, from 7:30 to 9 a.m. at the Crowne Plaza in Timonium. For information, visit www.cbnbaltimore.com.