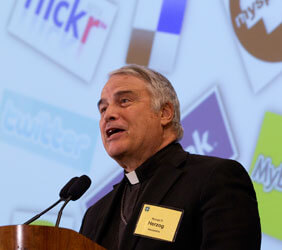 Social media is not only here to stay but should be recognized and used as a “new form of pastoral ministry,” U.S. bishops were told Nov. 15 in their annual meeting.

“Social media is proving itself to be a force with which to be reckoned. If not, the church may be facing as great a challenge as that of the Protestant Reformation,” said Bishop Ronald P. Herzog of Alexandria, La., a member of the bishops’ Committee on Communications, in an address to the U.S. Conference of Catholic Bishops in Baltimore.

Bishop Herzog noted that although social media has been around for less than 10 years, it lacks the “makings of a fad” and is “causing as fundamental a shift in communication patterns and behavior as the printing press did 500 years ago.”

“I don’t think I have to remind you of what happened when the Catholic Church was slow to adapt to that new technology,” he told the bishops. “By the time we decided to seriously promote that common folk should read the Bible, the Protestant Reformation was well under way.”

He delivered the committee report on behalf of its chairman, Auxiliary Bishop Gabino Zavala of Los Angeles, who was unable to attend the meeting because he was undergoing back surgery.

“We digital immigrants need lessons on the digital culture, just as we expect missionaries to learn the cultures of the people they are evangelizing. We have to be enculturated. It’s more than just learning how to create a Facebook account. It’s learning how to think, live and embrace life” in forms of blogs, Twitter feeds and online social networking.”

For starters, he said the church must be a voice in this frontier especially when “anyone can create a blog (and) everyone’s opinion is valid.”

He said once a question or contradiction is posted in a blog, Twitter feed or Facebook status, viewers “expect a response and something resembling a conversation.”

“We can choose not to enter into that cultural mindset, but we do so at great peril to the church’s credibility and approachability,” he said.

The bishop said young people in particular often use social media as their first point of reference in obtaining everything from news of the world to updates on their friends.

“The implications of that for a church which is struggling to get those same young people to enter our churches on Sunday are staggering,” he said. Or put another way: “If the church is not on their mobile device, it doesn’t exist.”

The bishop also noted that even with staggering numbers of those who use new media, the church should not abandon what he termed “legacy communication outlets,” stressing that many people still rely on newspapers, radio, television and books for information.

He said the best way for the church to effectively use new communication tools is through direction and support from the bishops and training of diocesan and parish staff members.

Bishop Herzog cited a recent survey of diocesan communications personnel conducted by the USCCB which indicated that diocesan officials want to learn more about how to best use new media to spread the church’s message and also requested more staffing and resources to do this effectively.

He said the survey revealed that many dioceses are beginning to use social media, but they are not all “devoting the time or expertise that it deserves.”

He urged his fellow bishops to provide more support and direction in this area.

“If as bishops you acknowledge that social media is not the latest fad, but a paradigm shift,” he said, “please accept the fact that your staffs – and perhaps you as well – will need training and direction.”