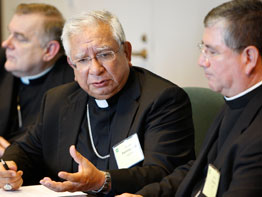 The raids, conducted by the Immigration and Customs Enforcement division of the Department of Homeland Security, “reveal, sadly, the failure of a seriously flawed immigration system,” Bishop Wester said at a Sept. 10 press conference at the bishops’ headquarters in Washington.

“The humanitarian costs of these raids are immeasurable and unacceptable in a civilized society,” he added. “Our current policies do little to solve the problem of illegal immigration to this country – they simply appear to do so, often at the cost of family integrity and human dignity.”

A May raid at the world’s largest kosher meatpacker, in Postville, Iowa, resulted in 389 arrests and criminal charges lodged against 305 workers. Bishop Ricardo Ramirez of Las Cruces, N.M., said at the press conference that Homeland Security had been conducting raids in Roswell, N.M., during the same week the U.S. bishops’ Administrative Committee was holding its Sept. 9-11 meeting.

Bishop Ramirez said attendance was “noticeably lower” at an annual special Mass he celebrated in the diocese Sept. 7. “There is fear,” he added. “People are afraid to go out to the grocery store.”

“Many Latino families are of mixed legal status and are fearful of being torn apart,” said Bishop James A. Tamayo of Laredo, Texas, who also was at the press conference. “As families are destroyed, so are their communities.”

The raids, Bishop Tamayo added, “pit human beings against each other in a violent and frightening way.”

The Homeland Security immigration enforcement budget will grow from $9.7 billion in 2004 to $15 billion in 2009, according to Donald Kerwin, executive director of the Catholic Legal Immigration Network. “To date, he added, 338 miles of border fencing (have) has been erected, and thousands of additional Border Patrol agents are being added to the existing force of 17,000.

“The Department of Homeland Security now detains 32,000 people per night, most of them in 310 local prisons,” Kerwin said, adding that the work-site enforcement raids are characterized by “their frequency, their immensity, the criminal prosecution of many of those arrested, and their devastating impact on families and communities.”

He said that those charged in Postville “were pressured to accept plea agreements or to face more serious criminal charges.”

The press conference by the bishops came one day after Bishop Wester said the U.S. Catholic Church would join an interfaith effort to change U.S. immigration law. To prepare for that effort in the next Congress, it also would join the Tour of the Faithful, an educational effort during September and October to convince people of faith to support changes in U.S. immigration policy.

“We’re in a dark period,” said Bishop Wester during a Sept. 9 conference call to announce the 17-city Tour of the Faithful.

“Our current national immigration policy … consists of work-site enforcement raids” that result in, among other things, “the dislocation of U.S. citizen children from their parents,” he added.

“As a nation – a nation of immigrants, I might add – we cannot accept the labor of immigrants while undermining their basic human dignity,” Bishop Wester said.