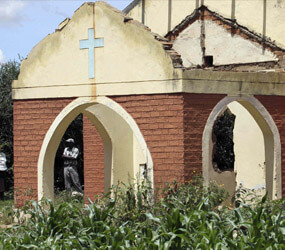 NAIROBI, Kenya – Catholic bishops said they would use the government-mandated 30-day period for education on the proposed Kenyan constitution to educate Catholics on the need to oppose the document.

Nairobi Cardinal John Njue, chairman of the Kenya Episcopal Conference, said the government had blocked church leaders’ efforts to discuss clauses that could lead to the legalization of abortion and the entrenchment of Islamic courts.

The cardinal read a statement, “Choose Life and You Will Live,” and said: “We do not believe that a document that is fundamentally flawed should be passed only with a very vague hope that it will be amended later, especially when the process of amendment is more difficult after (approval) than before.

“To vote for the constitution is to vote for all of it, including its good and its bad provisions. It is impossible to separate them,” the cardinal said.

“We cannot in good conscience advise Kenyans to vote for the proposed constitution of Kenya with the hope of future amendments. We also cannot in good conscience leave the matter to Kenyans without giving our considered advice in moral matters so that they can form their consciences in accord with the will of God expressed to us through the moral laws that form part of our cherished Christian tradition,” he said.

The bishops’ statement was issued May 11 at the end of their two-day plenary meeting and the same day the government launched a period of civic education about the document. Kenyans will participate in a referendum on the document before the end of August.

“The constitution is not a bag of potatoes (from) which you can remove five bad potatoes and retain the 95 that seem to be good. It is like an egg that is delicate and has to be well-preserved. And if it begins to go bad, it goes bad wholly, and you cannot separate the good from the bad,” the bishops said.

They called for prayers for the defense of life and a constitution that safeguards this reality.

“We urge all to pray the rosary and other prayers in our eucharistic celebrations and our small Christian communities so that God may listen to our cry and plea,” the bishops said.