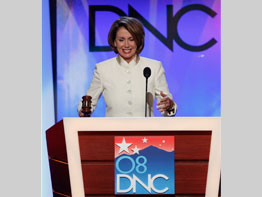 WASHINGTON – The chairmen of the U.S. bishops’ pro-life and doctrine committees criticized House Speaker Nancy Pelosi, saying she “misrepresented the history and nature of the authentic teaching of the Catholic Church on abortion” in a nationally televised interview Aug. 24.

Pelosi, D-Calif., who is Catholic, said in an appearance that day on NBC’s “Meet the Press” that church leaders for centuries had not been able to agree on when life begins.

An Aug. 25 statement by Cardinal Justin Rigali of Philadelphia and Bishop William E. Lori of Bridgeport, Conn., said the church since the first century “has affirmed the moral evil of every abortion.”

“The teaching has not changed and remains unchangeable,” the statement said. “Direct abortion, that is to say, abortion willed either as an end or a means, is gravely contrary to the moral law.”

Cardinal Rigali heads the Committee on Pro-Life Activities of the U.S. Conference of Catholic Bishops, while Bishop Lori chairs the USCCB Committee on Doctrine.

The statement recalled how in the Middle Ages “uninformed and inadequate theories” about the development of a child in a mother’s womb led some theologians to suggest that human life capable of receiving an immortal soul may not exist until a few weeks into pregnancy.

“While in canon law these theories led to a distinction in penalties between very early and later abortions, the church’s moral teaching never justified or permitted abortion at any stage of development,” the church leaders said.

However, they added, scientists discovered more than 150 years ago that a new human life begins with the union of sperm and egg, making such a biological theory obsolete.

“In keeping with this modern understanding, the church teaches that from the time of conception (fertilization), each member of the human species must be given the full respect due to a human person, beginning with the respect for the fundamental right to life,” Cardinal Rigali and Bishop Lori concluded.

“The point is, is that it shouldn’t have an impact on the woman’s right to choose,” she said.

Citing the U.S. Supreme Court’s decision in Roe v. Wade, Pelosi said specific considerations must be undertaken during each trimester of a child’s development before an abortion can be performed.

“This isn’t about abortion on demand. It’s about careful, careful consideration of all factors … that a woman has to make with her doctor and her God,” she told Brokaw. “And so I don’t think anybody can tell you when life begins, human life begins. As I say, the Catholic Church for centuries has been discussing this.”

She also said her goal is to make abortion safe and rare while reducing the number of abortions nationwide.

Other bishops weighed in after Rep. Pelosi’s interview, reiterating the church’s long-standing teaching on abortion.

Archbishop Donald W. Wuerl of Washington said that while he respected the right of public officials to address public policy issues “the interpretation of Catholic faith has rightfully been entrusted to the Catholic bishops.”

Quoting from the Catechism of the Catholic Church, the archbishop noted that the church has maintained its teaching on the “moral evil of every procured abortion” since the first century. “From the beginning, the Catholic Church has respected the dignity of all human life from the first moment of conception to natural death,” he said.