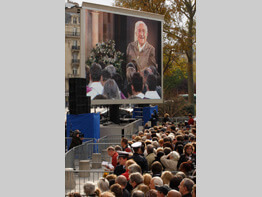 PARIS – Catholic bishops in France and Belgium have praised the veteran charity worker Sister Emmanuelle, who died Oct. 20 just before her 100th birthday.

At her funeral Oct. 22 in Notre Dame Cathedral, Cardinal Andre Vingt-Trois of Paris said Sister Emmanuelle’s personality and use of the media “made her an emblematic figure.”

“But the authenticity of her service showed itself in her capacity to gather all kinds of people behind her work,” he said of the Notre Dame de Sion nun.

In an Oct. 20 statement, the Paris-based Friends of Sister Emmanuelle said the nun had died peacefully in her sleep of natural causes in her order’s retreat house in Callian, in southeastern France.

The Belgian bishops’ conference said in a statement on its Web site: “For almost a century, this great lady radiated generosity and contagious enthusiasm throughout the world. Her life invites us to increase solidarity in times of trial and reminds us it is love which saves the world.”

In 1971 at the age of 63, Sister Emmanuelle went to live among garbage collectors outside Cairo, Egypt, building schools and dispensaries and promoting Jewish-Muslim dialogue.

“She understood that to love those needing food to survive meant being linked with them through her lifestyle, by sharing their misery and encouraging them to get out of it,” said Cardinal Vingt-Trois. “She became a ragpicker among ragpickers, plunging without exit into a solidarity of destiny with those who have nothing and are distrusted by all.”

Born into a well-off family in Brussels, Belgium, she became a nun in 1929 after studying philosophy at France’s Sorbonne University. She worked at a Catholic high school in Istanbul, Turkey, in the 1930s.

Sister Emmanuelle – who was noted for unorthodox views, including support for contraception and married clergy – publicized the plight of the world’s poor after returning to France in 1993.

Widely compared to Blessed Mother Teresa of Calcutta, India, and Abbe Pierre, the founder of the Emmaus Community in France, she was voted one of France’s most popular people, as well as the fifth “greatest Belgian” in 2005.